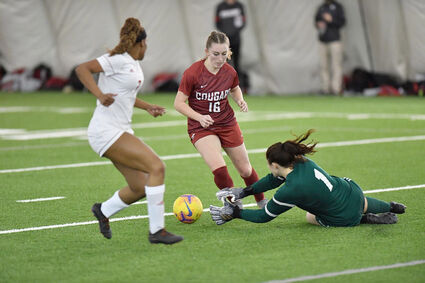 PULLMAN – After 460 days without competition, the Eastern Washington University soccer team finally returned to the pitch Feb. 12 as they faced No. 19 Washington State in Pullman for its season opener. Madison Kem gave the Eagles an early lead in the fourth minute via a penalty kick goal, but the Cougars found the final four goals to take the 4-1 decision.

"I thought we played much better today against a team that was obviously in the Final Four last year," Eagles head coach Chad Bodnar said. "We conceded a goal with a minute left in the first half and then 30 seconds into the second ha...