Eastern moves to third in Big Sky play, travel to Idaho for two this weekend 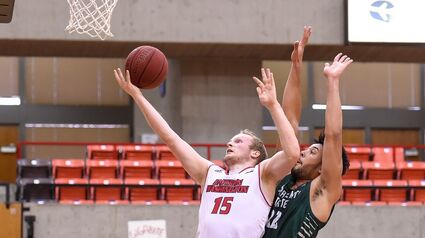 Eagle sophomore Tyler Robertson drives to the basket against Sacramento State's Ethan Esposito for two of his career-high 20 points in Eastern's 94-79 win over the Hornets Monday.

After a slow start likely resulting from a lack of practice the previous week, the Eagles used an 18-1 run - including a streak of 14 straight points - to stake a 37-22 lead at intermission and held on for a 68-60 win over the Hornets on Sunday. Twenty-four hours later, the Eagles responded with a career scoring output from sophomore Tyler Robertson and r...