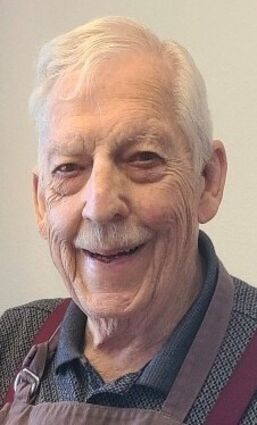 Dick served in the U.S. Army during the Korean War from 1952 through 1955, followed by eight years in the Army Reserve. He married Deloris I. Vandeventer in 1956 and they had three children. His career in public education, Dick worked as a middle school teacher and media specialist in Moses Lake followed by over 25 years developing, managing and directing the Continuing Education program at Eastern Washington University in Cheney, Wash. until his retirement in 1998.

In his early years, Dick enjoyed camping and boating with family and friends. He loved a good joke, keeping a little black book of punch lines for reference, and he relished a good game of cards especially if money was involved (even as little as a penny). Dick was a Happy Hour afficionado, as it allowed him to practice his jokes. And as a golfer, he was so proud of that hole-in-one!

In retirement he liked the occasional stop at the casino and traveling, spending winter months in Oceanside, Calif. As a volunteer Dick served his community as a member of the EWU Retirees Association, the Cheney FCU Board and the American Legion and as a volunteer at the Cheney Food Bank.

A Celebration of Life will be held at a future date. In lieu of flowers, donations may be made in his name to the American Red Cross, Cancer Can't of Spokane or ZERO – the End of Prostate Cancer. To share memories of Dick and leave condolences for the family, visit http://www.hennesseyvalley.com.

He will be greatly missed.