If you can't have lights, you can still have snowmen 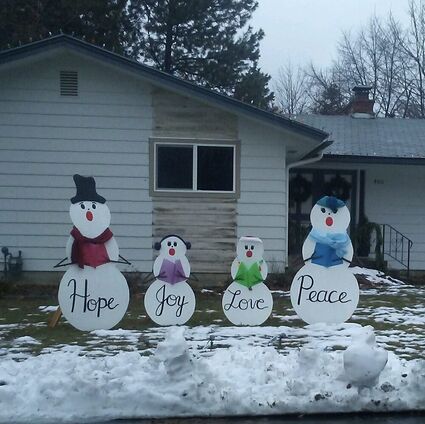 CHENEY – Residents Elsa Martin and Allison Hahn wanted to do something for holiday decoration, but felt they couldn’t compete with the beautiful light displays of Cheney residents. They brainstormed and decided they could do Snowman decorations.

The two women went door-to-door to their neighbors, asking for their support and participation. They were surprised at the number of neighbors agreeing with their idea and wanting to take part – enough to place snowmen on homes along two streets in North Cheney. They made 32 plywood snowmen and distributed them to neighbors who decorated their own snowmen uniquely. 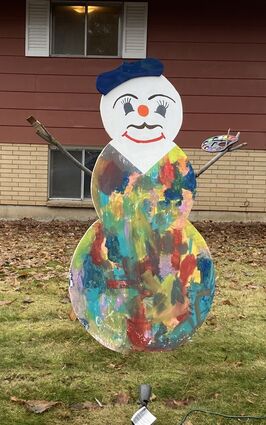 For two days before Christmas, the two streets, North 3rd and North 4th, were closed off between Nolan Brown Place and Oakland streets, allowing residents to stroll down the streets hearing Christmas music, receiving candy canes (130 were distributed) from elf Ameline and grandpa Santa. There was even a fire pit to warm the visitors.

“It seemed to be a bigger thing than I expected,” Kiwanis Club member Pat Isbell said about driving down the streets to see the decorations.

Kiwanis and Gardeners of Cheney want to recognize their contribution to the holiday spirit in Cheney. Elsa and Conrad Martin, 380 N. 3rd, and their neighbor Hahn hope to do this again next year.