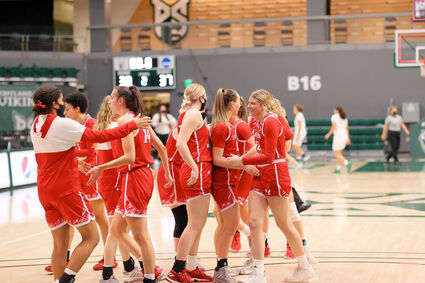 Eastern Washington women's basketball team celebrates after earning their first Big Sky Conference victory with a win over Portland State, the first of two triumphs over the Vikings.

PORTLAND - Two wins may not seem like much, but the Eastern Washington women's basketball team's pair of victories at Portland Stat Dec. 31 and Jan. 2 to open Big Sky Conference road play will surely be a confidence booster for a young team with just one senior that only managed three conference wins all last season.

Eastern improved to 2-2 in conference and 3-6 overall with the two victories, and in both games were led by a recognizable freshman from Spangle: Maisie Burnham.