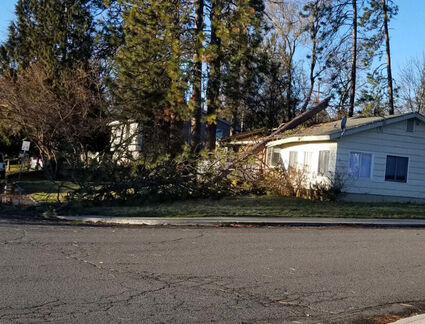 Part of a tree downed by Wednesday's high winds rests atop a house at the corner of 4th and Clay streets in Cheney.

Update at 6:04 p.m. -- In a message to parents and staff, Cheney Public Schools Superintendent Rob Roettger said a decision on whether or not school will resume will be made Thursday morning after officials assess the power situation. Snowdon and Windsor elementary schools along with Westwood Middle School still are without power. All three schools are in the area of Hallett, Grove and Thomas Mallen roads, which has been impacted by a major power line break (see below).

Roettger said a decision should be forthcoming tomorrow around 6 a.m. on whether or not to resume school.

Update 5:41 p.m. -- Cheney Light Department reports there are still about 150 properties in the city without power. Officials do not have an estimate when of when that power will be restored. Officials also stated that a transmission line that feeds the city went down from 1:30 -- 3 p.m.. Crews are now working on the local damage in the Cheney Light service area. There has also been a number of reports of trees down, including some at Sutton Park and one that destroyed a house at 5th and I Streets.

As of 4 p.m., Inland Power had reported a large number of outages, including customers in an area south of Cheney along SR 904, north of the city around Cheney-Spokane Road and around SR 904 and Jensen Road. About 522 customers are without power in the Four Lakes area as crews are replacing power poles, with power restoration estimated at tomorrow, Jan. 14, around 8 a.m.

The largest area of Inland outages is in the area of Hallett, Grove and Thomas Mallen roads where 2,300 customers are without power. A three-phase line is down with multiple trees on the line. Crews are busy effecting repairs and estimate power restoration Thursday around noon.

WEST PLAINS -- High winds from a strong cold front passing through the area have knocked down trees and powerlines, creating outages throughout the West Plains and elsewhere.

As of 8:24 a.m., Cheney Light Department is reporting two outages in the north end of the city. One outage has affected about 150 customers in the area of North 4th Street and North 5th Street -- with a large tree falling on a main power line. Officials report it will take several hours to remove the tree and restore power.

The largest area of outages so far on the West Plains was in Medical Lake and areas to the south where Avista reported over 1,600 customers without power. That area seems to have been restored as according to the utility's outage map, there are currently 290 customers without power in the east Medical Lake/Silver Lake area. Crews have assessed the issues and have scheduled resources to address the outages. 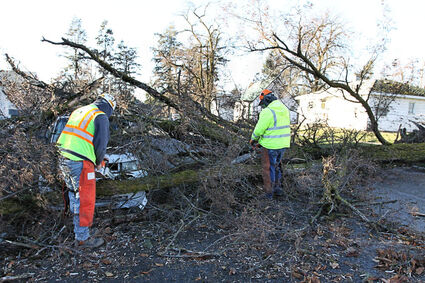 Crews work on removing a fallen tree from vehicles at 3rd and I streets in Cheney Wednesday afternoon.

Avista is showing a number of smaller outages throughout the West Plains, affecting anywhere from 2 - 10 customers. Inland Power and Light is also responding to a number of outages, with 13,536 out of 29,925 customers in Spokane County without power -- over 45 % of the utility's service.

On the West Plains, over 1,128 Inland customers were reported without power in Airway Heights as of 6:14 a.m. with another 522 outages north of the city and 390 reported out in the Jensen/Anderson roads area. Crews are working as quickly as possible to restore power.

Also affected by the windstorm are area schools. In an email this morning, Cheney Superintendent Rob Roettger told parents that due to the outages and forecast for continued high wins school was closed today, including in-person and distance-learning classes.

Medical Lake schools were also closed for the day, including remote learning.