Portions of Capitol campus locked down in advance of legislative session 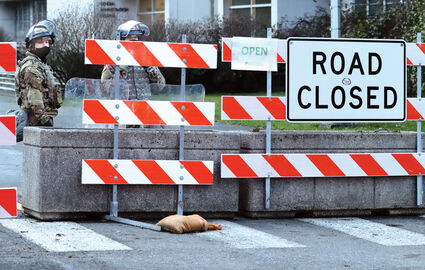 The Washington National Guard has already taken up positions around the state Capitol in advance of the opening of the legislative session Monday in Olympia.

OLYMPIA -- The Washington National Guard and the Washington State Patrol took up positions around the Capitol today in advance of the opening of the legislative session.

Their deployment came as two protests took place in the city.

The only damage reported was a broken window smashed when some Black Lives Matter protesters broke off from the main protest downtown and marched to the Capitol campus, where state troopers awaited them.

After the window damage, the group retreated to the downtown park where the protest was being staged.

Fencing and barricades have been erected around portions of...