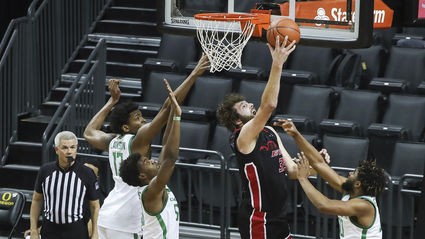 Forward Tanner Groves puts up a reverse lay-up Monday at Oregon. The junior has had a nice start to the season, scoring a career-high 13 rebounds against Oregon after scoring 13 points and grabbing five rebounds before fouling out against Arizona.

CHENEY-The third time wasn't a charm for EWU men's basketball's attempt to vanquish a PAC-12 opponent. The Eagles (0-3) fell to Oregon 69-52 Dec. 7 after hanging tough with Arizona but failing to hold a lead in a 70-67 defeat Dec. 5.

The pair of defeats, coupled with a seasoning opening loss to Washington State on Nov. 28 71-68, meant the Eagles were unsuccessful in their three tries at claiming their first victory over a PAC-12 opponent since a 2017 victory at Stanford.

"There are no heads hanging in the locker room because we played hard - we just got beat today," EWU head coach Shantay...