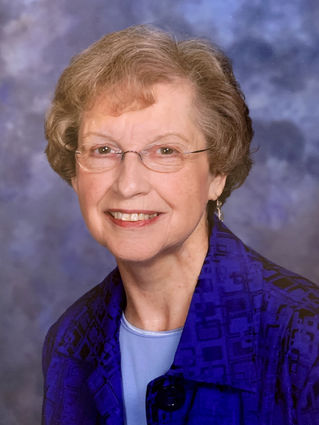 She was born March 14, 1933 and grew up in Missoula, Montana. She attended Loyola Sacred Heart all girls Catholic High School and graduated in 1955 from University of Montana with a bachelor's degree in Education with an emphasis in Home Economics and English.

She taught one year in Conrad, Montana before marrying Bill Shreeve June 2, 1956 and joining him in Johnstown, Colo. They grew their family to four children during their 12 years in Colorado. Never one to sit still, Joanne volunteered at the Catholic Church and played organ at Sunday mass. She established life-long friends in Johnstown.

In 1967, Bill and Joanne moved their family to Washington eventually settling in Cheney, Washington. They added their fifth child to the family. While raising their children, Joanne taught home economics, completed a master's degree in Education, taught piano lessons to dozens of students, was a regular volunteer at church which included writing the church history and she continued to play the organ at weekly mass eventually doing this for over 40 years.

Once her kids were older, she went back to teaching eighth grade English full time at Cheney Middle School. She would work late into the evening correcting papers for her 180 students. She had a genuine interest in young people and would develop special connections with her students.

In 2002 after she and Bill retired, they joined three of their grown children in Corvallis, Ore. Joanne and Bill loved being with her grandchildren and especially living near them. Joanne cared for Bill before he passed away in 2005 after nearly 50 years of marriage.

After Bill's passing, she embraced the Corvallis community by volunteering for FISH, singing in the St. Mary's church choir, joining PEO and meeting regularly with friends for lunch and dinner. She developed close friendships during her 18 years in Corvallis.

Joanne was a calm and friendly person that greeted everyone with a smile. She was an excellent listener who passed no judgment and enjoyed getting to know everyone she met. While she was raising her kids, she would take "quick trips" to the grocery store to get two gallons of milk and return more than an hour later having visited with everyone in the store.

Joanne was a loving mother, grandmother, wife, sister and friend. We will miss her dearly.

A funeral (by Zoom) will be held in January and details to follow on McHenry Funeral Home Website.