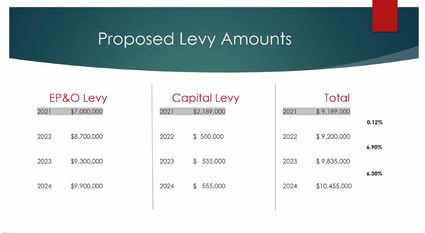 CHENEY — The school district board of directors could propose a regular operations and maintenance levy in February that would shift money collected from the capital facilities fund to the general fund. School district officials are saying that such a move is essentially revenue neutral, rather than leading to an increase in rates seen by taxpayers.

Finance Director Jamie Weingart said moving money from capital facilities to the general fund will help with several unknowns facing the district regarding funding — namely what it might receive in the way of education and transportation dollars from the state. While enrollment ticked up to 4,80.14 full-time enrolled students in November it’s still below last year’s numbers and well under the 5,053 FTEs the district used for budgeting this year.

Bus ridership is also 7.5 % of what it was last year, reflecting the need to physically separate students as one response to the ongoing COVID-19 pandemic. The state Office of the Superintendent of Public Instruction will begin collecting actual transportation numbers from districts after November. With the district’s current cash flow based on budgeted figures for enrollment and transportation, Weingart said she expects to see a decrease in state funding for both once actual numbers are available in January.

“The buckets have two different amounts compared to previous years, but overall those rates would be exactly the same,” Weingart said of the overall effect on rates.

Weingart said the move would still leave enough money in capital facilities to address any current and future needs. Shifting more collections to the EP&O levy would also address potential reductions in what the district receives through the state’s levy equalization program.

“Not because of anything we’re doing as a district but because our property values are increasing faster than what we’re seeing across the state as a whole,” Weingart said.

District officials believe assessed property valuation on the West Plains will continue to increase over the next few years, pointing to the amount of residential and commercial construction taking place.

Superintendent Rob Roettger said the district is looking at the overall picture when it comes to funding, especially the impacts COVID-19 measures have had on the local economy and residents. He noted the proposed levy in February is something that takes place every three years, not a special vote.

“We understand the impact of our decisions on the taxpayers and citizens and it’s been important to us to take a conservative approach and I feel like that’s what we’re continuing to do and at the same time to be able to meet the needs of our students and our district” Roettger said.