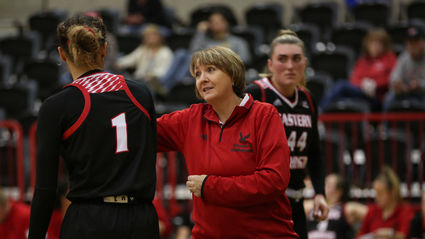 CHENEY – The Eastern Washington University women’s basketball team only has 16 more days to wait until the first highly-anticipated game day since March 2020, as the 2020-21 schedule was announced Nov. 9 by head coach Wendy Schuller, who begins her 20th season at the Eagles helm.

Due to the delayed start to the season, Eastern Washington will play only five non-conference games with three on the road and two at home at Reese Court. Big Sky Conference play will also look different due to a new conference format. The Eagles play the same opponents, besides Montana and Idaho, at the same site twice in one week. EWU will split between home-and-home with Montana and Idaho, also on the same week.

Eastern Washington has been practicing as a full team for nearly a month, and return three starters along with eight newcomers.

The season officially gets underway with a pair of road games against PAC-12 opponents. Eastern heads to Pullman, for the first time since knocking Washington State out of the WNIT in 2015, for its season opener on Nov. 25. Two days later, the Eagles face Oregon State in Corvallis on Nov. 27.

It’s then back on the road for the annual match-up with Boise State on Dec. 10. It will be the 11th-straight year that the two teams have clashed, and four out of the last five meetings with the Broncos have been decided by five points or less.

Non-conference play concludes with two more home games in December. The Eagles welcome Grand Canyon to town on Dec. 14 for the first-ever match-up between the two programs. On Dec. 19, EWU hosts in-state foe Seattle for the first meeting since 2011.

Eastern Washington then swaps weeks at home and on the road for the next four weeks of January, hosting Weber State (Jan. 7 and 9) and Northern Colorado (Jan. 21 and 23) while traveling to Southern Utah (Jan. 14 and 16) and Sacramento State (Jan. 28 and 30).

February gets underway with a home contest again on Idaho on Feb. 4. The Eagles then play at Idaho on Feb. 6, before hosting Montana State on Feb. 11 and 13.

The next week finds EWU in Missoula for a clash with Montana on Feb. 18 before hosting the Grizzlies on Feb. 20. The final week of the regular season takes place on March 3 and 5 at Idaho State.

Schuller is 271-305 (.470) overall in 20 years in Cheney, 161-157 (.506) in Big Sky Conference play. She has taken six teams to the conference tournament semifinals, including one championship game appearance, and five quarterfinal appearances — making the tournament in all but three seasons.