Lack of housing, improving suicide prevention are big focuses on base 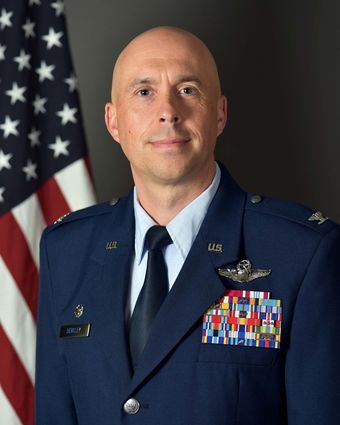 "Knowing when these apartment buildings are available and helping to share that knowledge, while making sure the houses are affordable (would help our families)," Bentley said when asked how chamber members can assist the base in regards to housing.

Housing on base is full, and 400 new military families arrived at Fairchild in the last 18 months, most of whom are living in the community.

Local expansion, including the opening of an Amazon Fulfillment Center on the West Plains, is great for the community and its growth, but it also makes it harder for military families to afford housing, Bentley noted.

The housing issue isn't new to Fairchild. Former wing commander Col. Derek Salmi informed the chamber in Nov. 2018 that expanded base operations would bring 1,000 new people to the area needing places to live.

Bentley informed the chamber that base leadership is trying to see if housing developers can keep old houses instead of demolishing them when they go to build new homes.

Bentley was a guest at the Chamber's special event as new Wing Commander on base after replacing Salmi in the position in July.

The base is also working on upping its mental health support to help lower suicide ideation. Suicide rates reached its highest point within the Air Force in 2019, rising to 137 suspected suicides from 103 in 2018. The Associated Press reported in September that military suicides were rising by 20% since COVID-19 reached the United States.

"You never know when an airman is going to walk by and just want to talk to someone," Bentley said. "It's all about prevention. It's usually stress when they get in trouble, so we just want to be there for them. Whether they're in the Air Force or not, they have a long life ahead of them, so we want to make sure they're making the right decisions."

The base is employing other strategies to help prevent suicide ideation, including implementing Applied Suicide Intervention Skills Training, also referred to as ASIST. The base will also train people to communicate suicide concerns with each other, so that "everyone's a sensor; everyone knows how to communicate," Bentley said.

Another concern on base is childcare, or lack thereof.

"Our childcare waitlist is quite high," Bentley said. "It was 115, and some of those are off base or staying at home...a lot of it is we don't have enough care providers, so we've been very aggressive in advertising and decreeing (the need)."

Bentley said the rise of minimum wage in Washington could contribute to the childcare issue. Fairchild is required to have at least 2,500 general schedule employees to receive locality pay and there aren't in the area. If that were to extend to North Idaho, there would be enough, but the minimum wage rate in Idaho being much lower than in Washington.

Fairchild leadership met with Congresswoman Cathy McMorris Rodgers and discussed the issue with her, and Bentley said she'd engage on behalf of the base to have the issue looked at.

In August, Travis Air Force Base in California had a wildfire that forced evacuation of base. The base sent all KC-10's to Fairchild, already the largest tanker base in the country. Ironically, a 240-acre wildfire that started off Bartholomew Road in Medical Lake reached base a week later, Aug. 27.

235 students had to evacuate, and Bentley commended the local community's response to save the building on base.

"If it wasn't for the local response, that building would've burned down," Bentley said.

The week of hazardous air quality following several area wildfires after Labor Day also affected operations on base, but Bentley said airmen on base were well-trained enough to adapt, again commending the relationship with the local community.

He shared that the base is closely following COVID-19 protocols and expressed his appreciation for the Spokane area, while receiving some friendly ribbing in the Zoom chat bar from chamber members for his mispronunciation of Gonzaga University.

"We have the best civilians I've ever seen on any base," Bentley said.