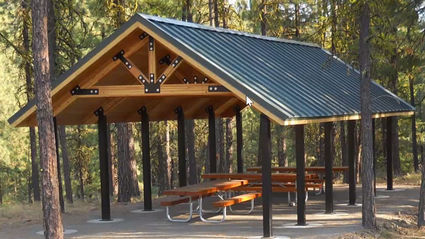 An image of the type of structure that will be constructed at Waterfront Park. The new structure will replace the old structure damaged during a wind storm in September.

MEDICAL LAKE - The structure at Waterfront Park that was damaged after a tree fell on it during a windstorm in September will be removed and replaced, City Administrator Doug Ross informed the City Council at its Oct. 6 meeting.

Ross didn't yet know costs of the replacement shelter, which is pictured above.

The old and damaged shelter was removed Oct. 12.

Mayor Shirley Maike reported that the city is working on the 2018-19 financial audit, risk management audit and getting ready for the budget cycle. The city is also preparing for winter season and plowing.

Ross reported that 15 businesses submitted applications for small business grants through CARES funding. The deadline to submit was Oct. 9. The utility bill grant funding hasn't been used yet, because Ross said he wants to wait since the city isn't doing any utility shutoffs and see if people need more help in November.

"I'm trying to be smart about this and capture everybody who's trying to pay their bill and give them a fair chance to apply for the grant," Ross said.

The grant's deadline is currently Nov. 30.

Ross sent council budget projections, which this year he described as mostly a guess due to uncertain economic times. He also said that there likely won't be a change in the property tax levy.

"With Fire District No. 3 not collecting their $1.50 from residents (and) the library renewing their 50 cent levy, the maximum we can charge residents is $3.50 per $1,000 of assessed valuation," Ross said. "It's going to be a little bit lower than it was this year...I would expect us and you as a council to approve a $0 EMS levy."

The city wants to replace the scoreboards at one or both of the baseball fields at Waterfront Park next year. Ross suggested naming one after former city councilmember Howard Jorgensen, who passed away in 2016, four months after resigning from council.