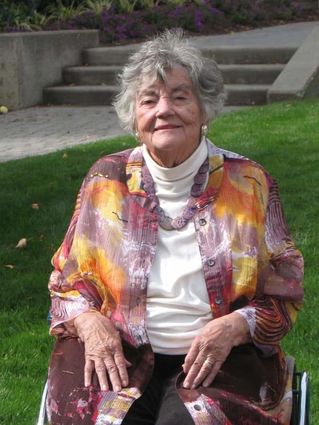 Marilyn was born Feb. 26, 1931 in Pittsburgh, Penn., the daughter of Wilbur and Mildred Smith. She lived in Cheney for 53 years.

Marilyn graduated from Judge Memorial High School in Salt Lake City, Utah, followed by two years at Washington State College where she was a member of the Alpha Gamma Delta Sorority. Marilyn set aside her college studies after falling in love with a tall handsome young man who had just returned from World War II. They were married Aug.18, 1950 at St. Augustine Catholic Church in Spokane, Wash. Marilyn and John moved to where his high school agriculture teaching assignments took them in Washington state; Prescott, Reardon and finally Cheney in 1966.

Those who knew Marilyn well may describe her as "A Force of Nature." Her main dream was to raise a large brood, a goal that she magnificently accomplished. Marilyn took a hard stance that parents should be involved and support their children's interests and well-being. She ensured that transportation was always available for athletic, musical, 4-H and FFA events, performances and parties. That same sentiment has been passed down to her children and their children.

Her natural inclination to support and protect often spilled over to her children's friends as well. The Elliot household was large enough to accommodate all kids who needed love and acceptance. Oftentimes the dinner table swelled beyond the 11 immediate family members, there was always room for one more.

Marilyn supported her husband John with his FFA duties. John and Marilyn would split the FFA students into two teams and take them to different fairs for livestock judging events. Marilyn ended up having quite a lot of experience with fairs and livestock shows. That naturally led her to becoming the livestock leader for the East Cheney 4-H Club for about 15 years. She and her 4-H team won first place at the Pacific International Livestock Show in Portland, Ore.

While raising nine children, she was civically active and eventually earned her bachelor of arts from EWU in 1982 in General Home Economics, Nutrition, Fibers with minors in Art and Women's Studies.

One of Marilyn's great loves was weaving and spinning wool. Marilyn excelled at off-loom weaving and natural dyeing. She conducted many spinning demonstrations at fairs, schools, and workshops in the state of Washington. A spinning highlight was during Spokane's Expo '74 where she was featured at the Folk Life Festival. Marilyn taught spinning, dying, and weaving at Spokane Community College and EWU's Red Barn Program.

Though Marilyn will be dearly missed, we know we will be with her again one day.

A memorial and graveside service will be held at 11:00 a.m. on Saturday, Oct. 17 at Cheney's Fairview Cemetery. Social distancing and face coverings will be required.

Donations may be made in the memory of Marilyn Elliot to WSU Foundation's Spokane County 4H Youth Development program https://foundation.wsu.edu/give/.