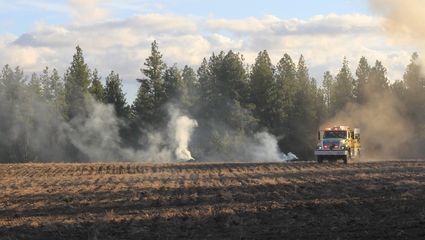 CHENEY--Fire District No. 3 received a call from a person concerned a "huge" fire had broken out after seeing plumes of smoke near South Graham Road, just southwest of Cheney at 4:32 p.m.

As it turned out, farmers had just been plowing the large field and burned the resulting piles of weeds, as they do every year in preparation for winter, according to a local who declined to be named. That was confirmed by Fire District No. 3, who responded to the call. Three trucks had arrived by 4:50 p.m. and were making conversation with locals before turning their attention to the various burn piles...