Making it safe to walk to school 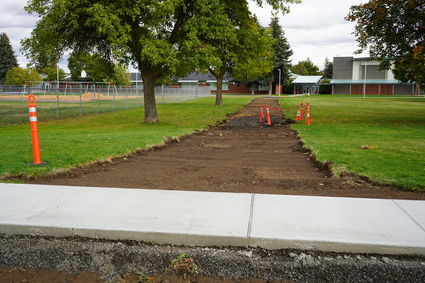 Part of the Safe Routes to Schools construction at Cheney High and Betz Elementary schools will feature a path through Hagelin Park.

CHENEY – Construction crews will be soon wrapping up a project that should make pedestrian and bicycle travel safer in the neighborhood around Cheney High and Betz Elementary schools.

The work improving sidewalks, crosswalks, curbs and adding extra signage is being funded by a grant from the Safe Routes to Schools Program, part of a national program with grant funding awarded from the Washington State Department of Transportation. Earlier this year, the school district received $598,619 in grant funding from WSDOT for the $748,273 project - funding that is being passed through the city of Cheney.

"The city had to manage the project due to the improvements being on city right-of-way and not school district property," Director of Public Works Todd Ableman said.

Project manager Todd Smith, of the district's project management consultant OAC Services, told the school board at its Sept. 29 meeting that the project bid in early August. The scope of work follows North 6th Street from Annie Place to Cedar Street, and North 8th Street from Cedar and Hagelin Park to Sunrise Drive.

Early work began on North 8th Street where a sidewalk is being constructed from Cedar to end of the high school softball field where it will connect with an existing walkway. New crosswalk markings are being put in at all intersections, and a flashing speed radar sign is being installed as well.

Crosswalk markings and improvements will also take place on North 6th Street. A speed radar sign will be installed at Annie Place along with a rapid-flash beacon sign at Ash and another beacon at Oakland street near the Cheney Congregational Church across from the bus loop/parking lot exit.

Smith said these were the only intersections on North 6th to have rapid-flash signs on the project.

"The state and the city were concerned we would have too many of these rapid-flash crosswalks, so they wanted to limit them and put them at the most frequented spaces," Smith said.

Ableman said it wasn't so much the number of rapid-flash beacon crossings but the distance in between. The two beacons on North 6th at Ash and Oakland are approximately 600 feet apart, and could potentially back up traffic.

Additionally, rapid-flash beacons will be on North 8th Street at the Cedar, Oakland and Sunrise street crossings. The Cedar to Oakland crossings are 700 feet apart while the Oakland to Sunrise is 1,000 feet.

"Two of the rapid-flash beacons are part of the project, and the Cedar beacon crossing was part of the mitigation of the Park Side Commons development," Ableman said.

The existing crosswalks at the high school near the St. Rose of Lima Catholic Church parking lot will be removed. With the creation of the parent student drop-off loop off North 6th in this location, Smith said planners didn't think it wise to "introduce students" into this traffic flow. Students will need to walk to Annie Place or Oakland to cross safely.

Another new feature will be creation of a bicycle/pedestrian path off of North 6th. The alleyway east of Betz will be paved and lit between Oakland and Ash for bicycle and foot travel, with the path turning west on Ash to eventually hook up with Hagelin Park, where it will widen to vehicle-width of 10-12 feet through the park and hook up with North 8th Street.

Smith said project work is proceeding well, and anticipates work should conclude by mid-October or at the most the end of the month. Smith said the work has actually gone smoother than usual due to an unanticipated "bright spot" associated with the COVID-19 pandemic - reduced traffic because of schools being essentially closed to most students who are distance-learning.

Information from WSDOT indicates that post-project numbers of children biking and walking at the Safe Routes project locations have increased by approximately 20 percent.