A record nobody wants 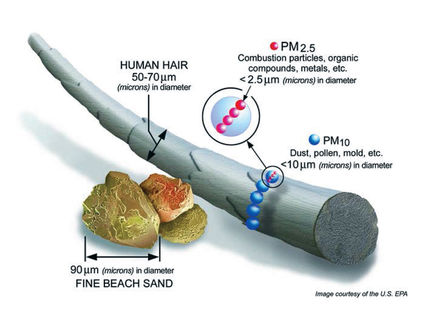 The difference in size between PM 2.5 and PM 10 particles is shown in the graphic above

SPOKANE COUNTY – Consider it two records we would just as soon have not set.

Due to smoke from fires in California, Oregon and Washington that blew in beginning late Friday night, Spokane County set back-to-back records for the highest air quality contamination in record keeping going back at least to 1999, according to information from the Spokane Regional Clean Air Agency.

On Sunday, Sept. 13, a one-hour reading at the agency's reporting station on Monroe and Wellesley read 499 for PM 2.5, a pollutant created by combustion largely linked to wildfire smoke. The reading is at the top of the chart for the "Hazardous" category, an emergency reporting category where conditions can impact the entire population rather than individuals with specific health conditions.

Prior to that, the one-hour average was 468 - set Saturday, Sept. 12. To put those two readings into context, the previous one-hour record was set in August, 2018, when smoke from wildfires in Canada blew into the region - and that record was 365.

Sunday's PM 2.5 reading resulted in a 24-hour average particulate concentration for the region of 468.6, more than 13 times the national standard of 35 micrograms per cubic meter of air as measured from midnight to midnight. It also resulted in a weighted 24-hour average air quality index (AQI) of 479.

Other stations in the agency's network recorded lower concentrations and AQI, although all of the PM 2.5 counts were in the hazardous range. But for reporting's sake, it was the Monroe and Wellesley station that got the nod.

"We report the highest pollutant from the monitoring network," Spokane Regional Clean Air Agency Communications/Outreach Section Manager Lisa Woodard said. "We report one AQI (air quality index) for the entire county as we are supposed to under EPA regulations."

Not all of the stations report the same atmospheric chemicals or pollutants, something important to remember Woodard said when analyzing the agency's online reports and charts. For instance, the Turnbull National Wildlife Refuge's station near Cheney measures PM 10, a larger-sized particle.

Anyway you looked at it, it was unhealthy air the likes the region had never seen before. The last time that happened was on Aug. 19, 2018 when the 24-hour AQI reached 257 and the one-hour concentration 206.7 - both in the purple or "Very Unhealthy" category.

Overall, the region's air is usually good this time of year. The periods where air quality was categorized as unhealthy during wildfire season the longest were 16 days in 2017, followed by 13 days in both 2018 and 2015, according to the agency. Most of the time, readings are in the low single digits.

Sept. 12 – 14 - Monday's AQI was 406 - were the first times the air quality index hit the maroon level, although there has been an increase in higher levels due to smoke since 2017. Woodard said much of the smoke that settled in the region over the weekend and through the beginning of the week was laying against the Cascade Mountains, waiting on the right weather conditions.

"This was a unique smoke plume that came over our area," she added. "But this is kind of a wake up call. This is becoming a repeated incident with wildfires."

Both the Regional Clean Air Agency and the Spokane Regional Health District outlined steps people can take in the future to protect themselves against the hazards of wildfire smoke in a joint news release Friday, Sept. 10. The best way is staying indoors and keeping indoor air as clean as possible by keeping doors and windows closed and improving the filtration in the home.

Running HVAC systems on recirculate and making sure filters are changed per manufacturers recommendations is a start. If you have to be outdoors, avoid physical exertion. More information is available on each agencies website.