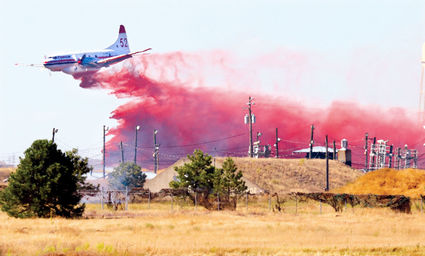 A heavy fire bomber drops retardant ahead of a fast-moving brush fire on Fairchild Air Force Base near Airway Heights today, Aug. 27.

The 100-plus-acre fire is burning northeast of the city and on Fairchild Air Force Base. Several homes and other buildings on the northeast side of the fire and off Bartholomew Road are threatened, but none are believed to have burned, a state Department of Natural Resources spokesman said.

Level 3 evacuation notices are in place for impacted homes, he said. 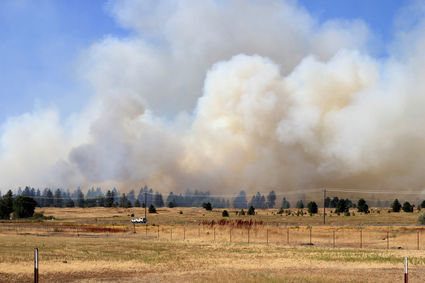 A wildfire races through dry brush and grass between Moses Lake and Fairchild Air Force Base this afternoon, Aug. 27.

Personnel with the Survival, Evasion, Resistance and Escape division on base have been evacuated. No damage to structures has occurred, according to the base's public affairs department.

No injuries have been reported.

The cause of the fire is under investigation.

The state Department of Transportation ordered Highway 902 closed between Milepost 7-10 at 2:01 p.m.; the highway reopened at 4:40 p.m.

State firefighting resources were mobilized at 3:30 p.m. per request of Fire District No. 3 Chief Cody Rohrbach, according to a press release from the State Fire Marshal's Office.

This is a developing story. More information will be released when it becomes available.

Drew Lawson is a reporter and sports writer for Free Press Publishing, including the Cheney Free Press and Davenport Times. He is a graduate of Eastern Washington University.