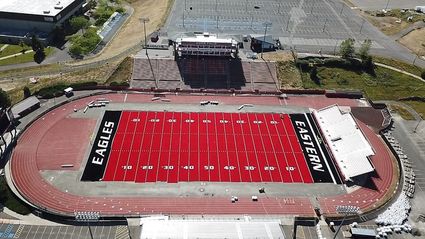 The new red turf at Eastern Washington University's Roos Field will likely have to wait until next year before it gets put into action by the Eagles football team.

OGDEN, Utah — A conference football season in which Big Sky powers Montana, Montana State and Weber State were slated to visit Eastern Washington University's newly-turfed Roos Field will have to wait until 2021.

On Aug. 7, Big Sky athletic directors moved an eight-game conference schedule to next spring, according to a release from EWU athletics. The Big Sky President's Council then approved the decision this morning, Aug. 7.

Nonconference games are still "under review," per the release.

EWU was slated to play Florida, Western Illinois and Northern Arizona in the nonconference schedul...