He led the transformation of Eastern to a university, the elevation of athletics, Spokane expansion 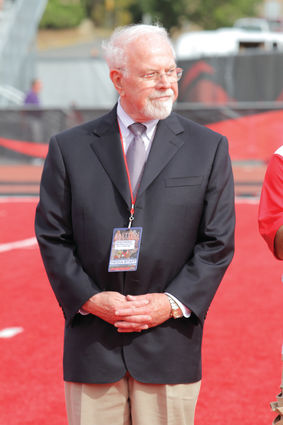 Former Eastern Washington University President Dr. H. George Fredrickson on the red turf at Roos Field during his induction into the university Hall of Fame in 2011. Fredrickson, who was instrumental in getting the Eagles into the Big Sky Conference as well as establishing an academic presence in downtown Spokane, passed away July 24 at age 86.

Frederickson, a 1961 graduate of Brigham Young University, and who earned his master's in public administration from UCLA and a doctorate down the road at USC, was chosen to replace Emerson Shuck who had served Eastern Washington State College between 1967 to 1976.

Frederickson, who served at EWU for a decade starting in 1977, also fought for the elevation of athletics at Eastern from small-school NAIA to NCAA Division I. Despite a great deal of pushback from faculty, Frederickson saw college athletics as a place that offered a school exposure not provided elsewhere.

Frederickson's work was rewarded when Eastern's football team won the 2010 Football Championship Subdivision. He was able to witness EWU's 20-19 victory over Delaware, Jan. 7, 2011 in Frisco, Texas. For his efforts, Frederickson, along with a number of associates, were inducted into the Eastern Washington University's Athletic Hall of Fame in 2011.

Arguably, his most important undertaking was greatly expanding Eastern's footprint in Spokane, helping orchestrate the purchase of the Farm Credit Bank, which ultimately has led to formation of the transformational University District in East Spokane. The property was acquired in 1982 and opened with 33 classrooms and space for 800 students in 1983.

That started the open competition often known as what Frederickson called "turf wars" with Washington State University, which seemed it had an unofficial claim to Spokane.

This "skirmish" Frederickson said in a 2019 interview eventually led to what he called a "peace agreement" that has led to the miraculous transformation of old Spokane rail yards into the glistening Riverpoint Campus that has participation from not only Eastern and WSU, but Gonzaga and Whitworth, too.

Just months after Eastern earned membership in the Big Sky Conference for its athletics in early 1987, Frederickson exited for his new career as the Edwin O. Stene Distinguished Professor of Public Administration at the University of Kansas in Lawrence.

Frederickson was born July 17, 1934 in Twin Falls Idaho, the son of Jack and Zelpha Richins Frederickson. He is survived by his wife Mary, his children Thomas (Leslie), Christian (Jenny), Lynne, and David (Julie) as well as a number of brothers.

Frederickson's family looks forward to celebrating his life next spring at a memorial service open to all family and friends.

The family suggests memorials go to the H. George and Mary Frederickson Fellowship at the School of Public Affairs and Administration at the University of Kansas, or to the EWU Foundation. All memorials may be sent in care of Warren McElwain Mortuary, 120 W. 13th Street, Lawrence, Kansas 66044. For more information or to post a condolence go to warrenmcelwain.com.