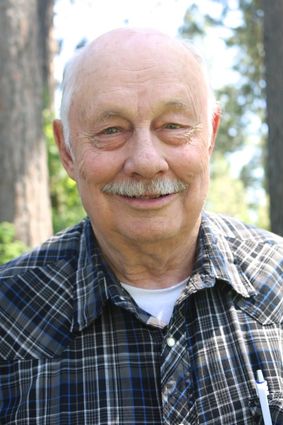 He was born on Dec. 12, 1937 in Mount Olive, N.C., fourth of five children to Joe and Eva Hinson. He grew up in Mount Olive, N.C. where his father worked for the Mt Olive Pickle Co., which Joe was a fan of his entire life. Joe joined the Air Force when he was 17, which took him all over the world.

Joseph “Joe” met Pat (Sullivan) Hinson in Wenatchee, Wash. while cruising around the A&W with his airmen buddies. They were married on Oct. 2, 1957 in Coeur D’Alene, Idaho. They enjoyed a happy marriage of nearly 63 years, and welcomed the birth of three children: Terri, Christy and Joseph (“Joey”).

During their marriage, the Air Force took Joe and Pat to many different places to live, including Libya, Las Vegas, Kansas and North Carolina before ending up at Fairchild Air Force Base and settling permanently outside Cheney/Medical Lake. Joe served a long career in the Air Force, that took him all over the world, and included his service in the Vietnam War as a B-52 gunner.

He retired with the rank of Master Sergeant in 1983, and then started a long career with the U.S. Postal Service, working at the Cheney Post Office until he retired in 2007. Retirement ended quickly when he started working part-time with the DAA auction, just so he could socialize with other people. He was a hard worker, a proud Veteran, and involved in the B-52 Gunners Association, the Walleye Club, and the Cheney Church of the Nazarene.

Joe was a wonderful husband, father, grandfather, family member, friend, and Christian. He was an incredibly kind and joyful person, who loved to laugh, told many jokes and stories, shared his blessings generously and would talk to any stranger he met as if they were lifetime friends. He deeply loved his wife and family and devoted his life to helping.

He enjoyed fishing, hunting, video games (especially with his grandsons), movies, watching sports, traveling, planning riddles for the family Easter egg hunt and spoiling his dog Sadie. Joe had the best hugs and stories, and a deep love of candy and dessert (especially pie!). When asked how he was doing, he would always respond, “I’m blessed! Happy to be here!” He loved his children, and adored his grandchildren and great-grandchildren, showing up to support everyone however he could, and never missing a chance to tell his family he loved them and was proud of them.

A funeral service will be held Tuesday, July 7, at 11 a.m. at Cheney Church of the Nazarene, 338 Betz Road, Cheney. Due to the current COVID-19 pandemic, the funeral and burial will be socially distanced, masks will be handed out to all participants and there will be no reception.

In lieu of flowers, please make memorial donations to the American Cancer Society [http://Donate3.cancer.org] in memory of Joseph “Joe” Hinson and his battle with liver cancer. Online guestbook at cheneyfuneral.com.