Fireworks sale and discharge through July 5 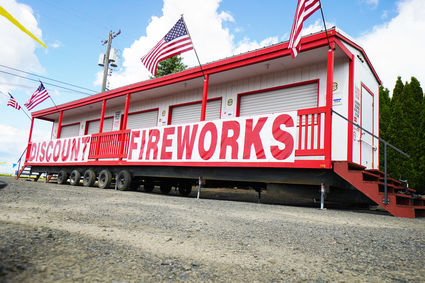 Update July 4 at 10:49 .m. -- Discharge of fireworks in Airway Heights are only allowed on July 4 from 8 a.m. to midnight on private property in the city limits. Sales are allowed from July 2 at 8 am until July 4 at 8 pm.

OLYMPIA – For some on the West Plains, the noise level is about to get a bit sharper – that is if it hasn’t already.

A state license is required along with a local permit to operate a fireworks stand in Washington. According to the release, the State Fire Marshal’s Office (SFMO) issued 633 retail fireworks stand licenses in 2020; this number is down from last year’s total of 698.

Currently, only the cities of Medical Lake, Airway Heights and Deer Park allow the selling and discharge of fireworks. It is illegal to sell, possess and discharge fireworks in the rest of Spokane County, including the city of Cheney.

Even though fireworks may be legal within a jurisdiction, the state Fire Marshal Office notes not all of them are legal in Washington. Items like firecrackers, bottle rockets, sky rockets and missiles are illegal to sell, possess and/or discharge within the state.

These items are federally legal and are available for sale or discharge on some designated tribal lands. According to the May 26 issue The Rawhide Press, the Spokane Tribe of Indians Business Council voted to prohibit the sale and use of fireworks on its lands this Fourth of July as part of measures to slow the spread of COVID-19.

State and federal laws also prohibit items such as M-80s, M-100s, altered fireworks and homemade devices. These devices are high powered and can cause devastating injuries.

They are not being sold at a licensed and permitted stand

The fireworks are missing safety warnings, instructions, and a description of the effects

It looks homemade, is wrapped in electrical tape, or the contents are exposed

It appears to have an abnormal fuse.

Contact local law enforcement or the Bureau of Alcohol, Tobacco, Firearms and Explosives if coming across a device suspected to be illegal or is unsafe.

For those who don’t want to or can’t discharge fireworks, Spokane County Parks and Recreation, Spokane Public Schools, city of Spokane Parks and Recreation and the Spokane Indians Baseball club are partnering to hold four separate fireworks displays this Saturday. The locations of the displays are Spokane’s Dwight Merkel Sports Complex and Ferris High School, Avista Stadium and Plante’s Ferry Sports Stadium in Spokane Valley.

The displays will be run drive-in movies style and adhere to those guidelines established under the state’s Phase 2 reopening plan, with cars parked in every other space Parking is limited at the locations and begins at 9 p.m., with the displays taking place at 10 p.m.

“With all the cancellations of events and programs this summer due to the pandemic, it’s uplifting to be part of a project that is adapting to the times,” Spokane County Parks, Recreation and Golf Director Doug Chase said in a news release. “Our hope from a county perspective is that the drive-in fireworks displays serve as temporary respite and a beacon of positivity to the community.”

SWX will also broadcast the fireworks live on television. Tune into 93.7 FM The Mountain beginning at 9:30 P.M. for continuous patriotic music.