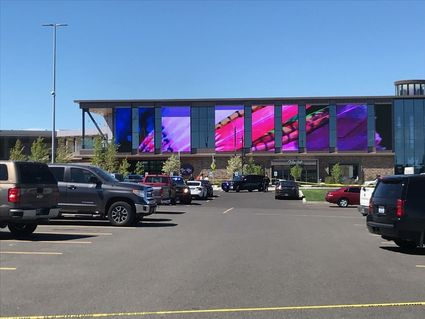 A theft and trespassing suspect was apprehended after he crashed a vehicle into three other cars attempting to elude police at Northern Quest Resort & Casino Monday afternoon.

AIRWAY HEIGHTS – A suspect is in custody Monday after Kalispell Tribal Police responded to a report of theft and trespassing at Northern Quest Resort and Casino in the parking lot behind the M&D Theater around 12:50 p.m., according to Erin Johnson and Chief Brad Richmond of the Airway Heights Police Department.

Officers located the suspect, whose name was not released, within minutes and attempted to apprehend them. Instead of cooperating with the initial investigation, the suspect fled the scene, got into a car and crashed into three vehicles. Two vehicles were Kalispell Tribal Police patrol cars, one of which had an officer inside. The other vehicle was an unoccupied civilian vehicle.

During the incident, which was captured by security cameras at Northern Quest, a Kalispell Tribal Police officer discharged his duty weapon. The suspect was taken into custody without further incident with non-life threatening injuries. The suspect refused medical attention. No one else was seriously injured. Johnson and Richmond could not disclose whether the duty weapon was fired at the time of their report.

It was then discovered that the suspect had an outstanding felony warrant in Spokane County for their arrest. The investigation is still ongoing. Johnson and Richmond predicted that the investigation would take two to four more hours after their report to the media, which occurred around 5 p.m. All information was provided in Johnson and Richmond's preliminary report.