The station is leaving 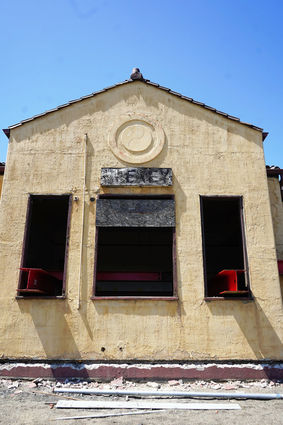 CHENEY – The realization of a dream is just five city blocks away.

That's the distance between where the former Northern Pacific Railroad Depot - a.k.a. the Cheney Depot - currently rests and its new home between Union and I streets on 1st Street. With some additional structural support and last-minute engineering adaptations to account for years of age, that distance will soon be traveled by the 91-year-old structure built by Northern Pacific in 1929 to acknowledge Cheney's support for the railroad.

Hired in late-2019, crews with Spokane's Walker Construction and DB Davis Structural Movers, LLC from Everett, Wash. have been onsite at both locations since May 4. Currently the bulk of the work falls to DB Davis owner Dell Davis and his team - who are using a combination of wood and steel to support the building and create a sort of cradle the 120-foot long structure will ride in on its journey to a new home.

"Sometimes it looks like overkill, but once you get a hold of her, you don't want to look back," Davis said.

Davis is part of a family that has been moving structures since 1884, migrating to the Pacific Northwest with his wife Rose in 1997. All of his crew members are "journeymen house movers," including some who - like Davis - come from house-moving families.

"We all work very close together and speak the same language when it comes to moving buildings," Davis said.

It's an occupation filled with terms such as jack cribs and banding beams and equipment such as hydraulic moving dollies, track loaders and a Mack RD 822 Prime Mover. The latter is the business end of the hauling assembly that will hook up to six hydraulic moving dollies to transport the depot down the Burlington Northern Santa Fe right-of-way to its new home.

It's a seven-step process to move the depot, beginning with mobilization. Davis and his crews are wrapping up step two, which is installing jacking cribs, jacks; two, 124-foot main beams, cross beams and banding beams to form cradle framework.

Once that is done, the building will be wrapped via the beams with high-tensile strength banding to form the cradle the structure will rest in once it's jacked up for moving. Davis said the banding is similar to what is found in lumberyards to bundle wood, but of a much more industrial strength.

The banding will be reinforced with clips and more banding to secure it from swaying as it moves. The steel cradle is also reinforced, mostly by bolts but in some cases by welding and simple gravity.

The crews have also been drilling the perimeter of the building at the foundation to free it from the actual wood and stucco structure. As this work has progressed, Davis said they have found small pockets of rot that went undetected for years - pockets that must be accounted for in the shoring up process.

"She's a cantankerous old girl as far as rot work," he added.

Once the cradle is ready, it will be hooked up to a unified hydraulic jacking machine, with pressure applied individually to each jacking station to free the building. Once that is done safely, it will then be raised in 14-inch increments - with support beams inserted at each step of the process - until it is at safe moving height.

Rocker and walking beams will be installed to allow the set-up to safely adjust to any changes in terrain. When ready, the Mack 822 will slowly move the structure down the right-of-way and across Cheney-Spangle Road, slowing drifting to the right away from the BNSF tracks and in a position to be placed at its new home.

Once there, the depot will remain in the cradle connected to the jacking system and supported by bracing. At this point, Walker Construction takes over. 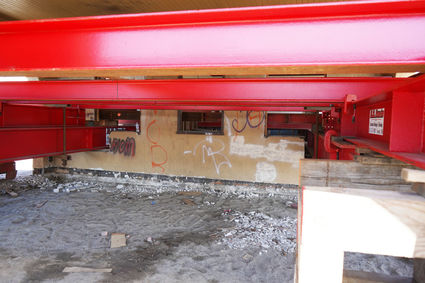 Walker project manage Greg Farquhar said his crews will create a foundation for the depot, working underneath the cradled structure. While the Cheney Depot Society was able to secure the original plans from BNSF, Walker said building the foundation and other work that accompanies it - such as water and sewer and electrical conduits - underneath the suspended structure allows them to construct it as is, rather than building a foundation first and then finding out that things don't necessarily align correctly.

Once the foundation is done and ready, Davis and his crews will return and do the work to raise the building in exact reverse.

"They will then hydraulically drop it on to the foundation," Farquhar said. "It's all about getting the building finally set."

Depot Society officials had originally set June 8 for moving the building. Davis said that will likely pushed back a bit further into June.