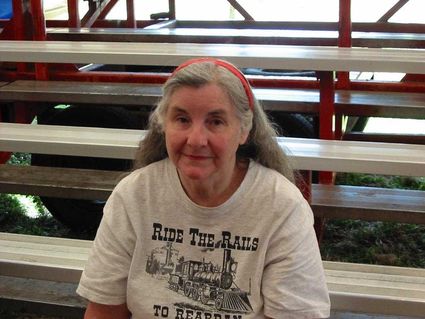 Ruth Thomas, 86, passed away on May 18, 2020. She was born March 22, 1934, in Fossil, Oregon, to Mary and WP Thomas, the last of ten siblings. She grew up on a farm south of Richmond, Oregon, attending a one-room school. She graduated valedictorian from Wheeler County High School. Ruth obtained a job with the railroad and the beginning of a life-long love of trains, opting to take a train over any other model. She arrived in Spokane in the worst recorded winter of 1951 and vowed to leave as soon as the snow melted. But then spring sprung and she fell in love with the city. She worked for a while at Sacred Heart’s laundry while taking telegraph operator classes before getting married to Charles Marion. She followed him to Fort Sill, Oklahoma, where she gave birth to her son, Tom. Upon return to Spokane she got a job at The Crescent (department store) in accounts receivable. She then quit that job to have her second child, Nancy. In the mid-60s she got a job with the City of Spokane as a clerk typist where she moved up to Taps and Meters when she retired in the late 80s. She was a life-long LA Dodgers fan, claiming Tommy Lasorda the greatest ever. Ruth took a part-time job with the Arc of Spokane before retiring. She was a life-long Baptist. She was an avid coupon clipper and had a generous heart in her own way. Ruth once told a panhandler outside a McDonald’s that she didn’t have much money, but she had a two-for-one on Big Mac’s and got him one. The world will be a little less without her. She is survived by her sister, Willa May Burns, Portland, Oregon; daughter, Nancy (Rick) Johnson, Panama City Beach, Florida; son, Tom Marion, Cheney; and numerous nieces and nephews throughout Oregon and the Spokane area. Cheney Funeral Chapel, Cheney, WA. Online guest book at cheneyfuneral.com.