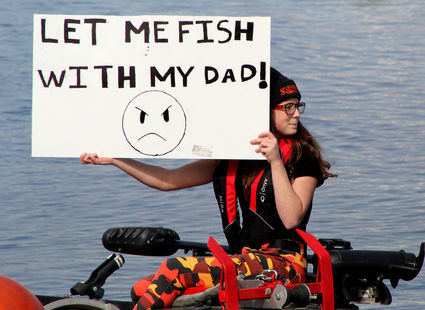 Parker Posey, 13, of Dayton, holds up a sign while on the bow of her father's fishing boat during the Let Us Fish protest today at Columbia Point Park in Richland.

RICHLAND — Under the watchful eye of a city park ranger, hundreds of protesters from across Eastern Washington launched boats and filled Columbia Point Park today calling on Gov. Jay Inslee to end the ban on boating and fishing.

Statewide, fishing, boating, camping and some hunting were shut down by the state Department of Fish and Wildlife until at least May 4, in accordance with the governor's quarantine due to the coronavirus outbreak.

More than 100 boats were visible on the water, and there were reports of supporters around the state doing the same closer to their homes.