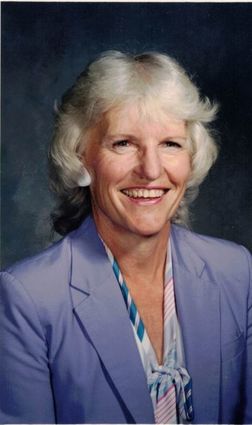 Altamae Sims Whitehill passed away peacefully on Feb. 13, 2020. She was born in Spokane to Leone and Edna Sims on July 16, 1929. According to family lore, her mother didn’t trust the doctors in Okanogan County where the family ranch was located, so they traveled east to Spokane for her birth.

Altamae lived a rich and active life as a teacher, world traveler, devoted wife, mother of three boys, mother-in-law extraordinaire and beloved grandmother to numerous grandchildren, step-grandchildren, and great grandchildren. She was affectionately known as “Pooh” by those close to her because of her many “grand Poohbah” roles in leadership positions with organizations such as PEO, the Cheney Community Service Council and the Washington Association of Educators of Talented and Gifted. She even claimed the title of “Teacher of the Year” for the State of Washington during her career.

Altamae grew up in rural Okanogan County, near the Scotch Creek Basin homestead her father’s family built in 1892. From her youth, Altamae immersed herself in books, both to learn more about the world outside the ranch and to avoid her “rambunctious” younger brother Bob and kid sister Peggy. Altamae had a college-educated mother (a rarity in those days) who had come to Okanogan County to teach in the one-room schoolhouse at Happy Hill. In Altamae’s own words, “women were only encouraged to pursue a few professions, such as teaching, nursing, or administrative work.”

At the beginning of her freshman year in high school, the family moved to the town of Okanogan, allowing Altamae to attend a “large” school with more opportunities. Her senior class had 46 students. She excelled in academics and music, which led her to follow in the footsteps of her grandfather and mother, pursuing her teaching certificate at Eastern Washington College of Education (now Eastern Washington University).

While at Eastern, Altamae was elected president of the Association of Women Students and was chosen by her senior class as the official college hostess. She also caught the eye of M. Patrick Whitehill, a track star and varsity basketball player at Eastern who hailed from Goldendale. After a happy courtship, the young couple gave up trying to hide their relationship from head basketball coach “Red” Reese and were married in Okanogan on March 31, 1951. Graduation soon followed, and they settled into their married life as teachers in Chewelah. Their three sons, Barry, Terry and David were all born while the family lived in Chewelah.

Patrick pursued his master’s and then a doctorate degree from the University of Oregon, necessitating a rather nomadic family life for a few years. Through it all, Altamae continued to teach, manage moves and oversee her three active sons. Eventually, they put down deep roots in Cheney, where Patrick took a job teaching at Eastern Washington University, while Altamae settled into a career as an educator with the Cheney School District. She found her true calling teaching middle school students, and she had all three of her sons in class over the years.

Altamae became an administrator/teacher when she developed and initiated the inaugural gifted program for the Cheney School District. While serving in this split position, Altamae was faced with a dilemma when the Cheney teachers went out on strike. Ever the peacemaker, she joined striking teachers for half of her work day, then returned to her administrative role the other half of the day.

After retirement, Patrick and Altamae moved to Clarkston. They entertained friends and family in their beautiful home overlooking the Snake River; and Patrick often answered the “call of the steelhead,” with fly pole in hand while Altamae kept him company with a pile of books nearby. When it wasn’t fishing season, the couple enjoyed traveling to dozens of countries on five different continents. Altamae’s success at highly competitive cribbage and Scrabble games demanded respect from family and friends. This competitiveness also manifested itself in her completing more than 15 Bloomsday Runs, including earning one top-three finish in her age group.

Not long after Patrick passed away in 2012, Altamae moved to Portland to be closer to family. She was active in her retirement home community, helping to plan events, volunteering in the on-site library, singing in the choir, and enjoying local excursions. She loved playing her piano for guests who stopped by to visit and she always had a cribbage board at the ready for potential victims.

A memorial service will be held at the Cheney Congregational Church at a later time. In light of current concerns with COVID- 19, the date is uncertain. Please feel free to contact Barry Whitehill at wapiti@mosquitonet.com if you hope to attend.

Altamae and Pat were avid sports fans and lifelong supporters of education. Those who wish to mak e gifts in Altamae’s memory are asked to consider the Eastern Washington University Eagle Athletic Fund or the Philanthropic Educational Organization (P.E.O.).