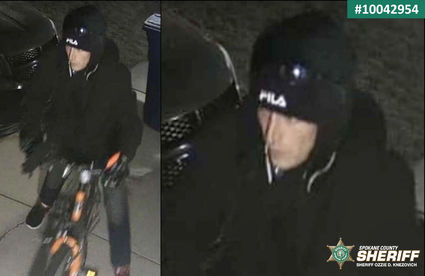 This male is wanted in connection with several vehicle prowls that took place in Medical Lake April 6.

MEDICAL LAKE -- The Spokane County Sheriff's Office is asking for the public's helping in identifying an individual wanted for questioning in a series of vehicle prowls that took place in Medical Lake April 6.

According to an April 7 news release, the male was captured on two separate home security cameras. He is described as a white male, approximately 20-30 years old, thin, wearing all black, and riding an orange and black bicycle.

The Sheriff's Office activity log for April 6 lists seven reports of vehicle prowls, three in the 1000 block of Wilcox Avenue and one each in the 800 block of...