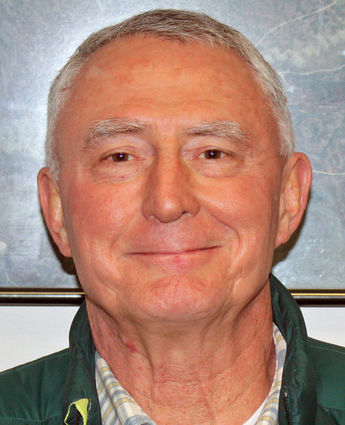 Emmett Schuster was being shown around Odessa by outgoing hospital administrator Mo Sheldon last Friday afternoon and dropped by The Odessa Record for a chat. Schuster is a native of Weslaco in south Texas but has spent most of his adult life living in various countries and various cities in the U.S. He was a career military man who served Desert Storm in the Middle East, in Germany and elsewhere.

He entered the field of healthcare administration upon his retirement from the U.S. Army. After spending 12 years at Gibson General Hospital in Princeton, Ind., he opted to take interim positions for the present. Most recently, he was the interim president and CEO at Willapa Harbor Hospital in South Bend, Wash.

In Odessa, he will also serve as an interim CEO, replacing Sheldon who has accepted a job in Arizona to be closer to her widowed mother. Schuster has a six-month contract and will work with Sheldon up until her final day of work.

Schuster is married and has a grown son and daughter. He likes to hike and run to keep in shape. We at The Record hope he enjoys his stay in Odessa.