COLFAX -- The Fonk's building burned Tuesday night, its roof collapsing in a fire still being investigated Wednesday morning with no cause yet determined.

Three people were injured, including two from neighboring apartments and a firefighter. All have since been released.

Fire crews will be on scene throughout Wednesday. A Pullman Fire Investigator was called in to pursue the cause of the fire.

The fire was first reported at 7:02 p.m. Tuesday with Colfax crews responding to find smoke coming from each side of the two-story brick building.

According to Randy Miller, incident command, firefighters entered the back of the 1892 structure and were quickly met with large flames.

The department then pulled the crew from the inside the building and went into a defensive attack mode.

At 7:45 p.m. the fire was upgraded to a second alarm, which added more outside aid from Palouse area fire departments. It was later upgraded to a third alarm. The fire was contained at approximately 10:13 p.m.

Earlier, to limit heat from the fire to protect neighboring buildings, Colfax's Ladder One and a Pullman ladder crew sprayed water through the top of the building after the roof caved-in.

The fire remained limited to the Fonk's building while some smoke and heat damage affected neighboring apartments on Main Street and Bruning Funeral Home behind it. 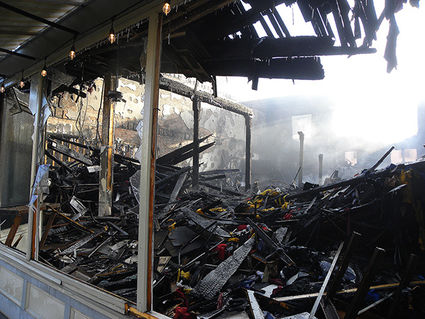 Main Street in Colfax was closed during the fire response, and remained partially closed Wednesday morning as inspection and investigation continue.

Total crews on scene were 26 apparatus (engines, ladders, ambulances, command and investigation) and approximately 80 volunteers from many agencies.

Aside from Fonk's Coffeehouse in the front, the building held warehouse space for an apparel company. It was originally built to house the Great Eastern Department Store, until 1928, when it became Fonk's Variety Store.

The building has been owned by Steve and Debbie Warwick since 2009.

The City of Colfax has hired a consulting engineer to determine the structural integrity of the building and those nearby.