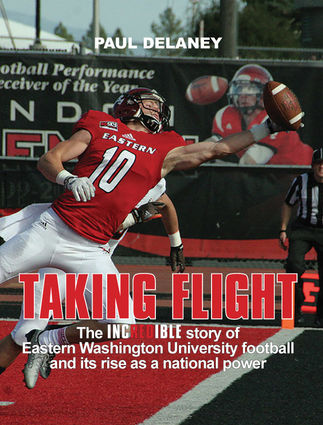 MILLWOOD – Seldom does someone get a chance to chronicle history from an up close and personal view.

For over 12 years, former Cheney Free Press staff reporter Paul Delaney spent Saturday afternoons on the sidelines at Eastern Washington University covering Eagles football. He watched and recorded as the field changed from Woodward to Roos, the turf from green to red and the Eagles program from a competitive Big Sky Conference team to a national powerhouse.

Delaney has chronicled that metamorphosis in the book "Taking Flight: The Incredible story of Eastern Washington University football and its rise as a national power." It's the third book for the veteran journalist, who has also penned accounts on Spokane Chiefs hockey and Gonzaga Prep and Spokane high school football.

"Taking Flight" isn't so much a history of EWU football from beginning to now as it is a mixture of history – told through extensive interviews with those who made things happen – and "repurposed" stories written by Delaney and other Cheney Free Press writers. It's divided into specific sections detailing "Incredible Games," "Incredible People," "Incredible Milestones," "Incredible Statistics" and "Incredible Trailblazers."

Delaney said he's playing off the "IncREDible" theme EWU adopted not long after they changed the field from green grass to artificial red turf in 2010, thanks to financial assistance from former Eagles and Tennessee Titans football player Michael Roos.

"That's a story in itself," Delaney said of being able to borrow on the theme for the book.

Eastern celebrated 100 years of playing football in 2008, fielding teams through various incarnations of the school from the Normal School years to Eastern Washington College of Education, Eastern Washington State College and eventually EWU in 1977. The program played in various smaller leagues, but in the early 1980s through the guidance of individuals such as former university President Dr. H. George Fredrickson and former player and then head coach Dick Zornes, transitioned out of the regional organizations and into the larger NCAA Division I-AA and Big Sky Conference.

It was a move not without a lot of rancor and opposition, but individuals such as Fredrickson had a vision for university sports and the positive impacts it could have on the institution. Delaney said the former president told him of his childhood in the Midwest, a time spent listening to the legendary broadcaster Lindsay Nelson call Notre Dame football games on the radio.

"He (Fredrickson) got the impression that, 'boy, that Notre Dame must be a nice place to go to college,'" Delaney said.

With Zornes, recounted over two hours spent in a Chewelah tavern, it was how the program benefited athletically from the demise of community college football in Washington - which provided a treasure trove of local talent not likely to go elsewhere - to how athletic directors such as Larry Hattemer teamed up to get and develop that talent and create a football environment essentially on the cheap.

"There was never any money," Delaney said.

Other interviews include coaches Mike Kramer, Paul Wulfe and Beau Baldwin, ADs Scott Barnes and Bill Chaves and EWU presidents Steven Jordan, Rodolfo Arevalo and current President Dr. Mary Cullinan, along with players from various EWU teams, game recounts – including eyewitness reporting from both national title appearances and the 2010 championship – and feature stories. Through it, Delaney details not only how EWU rose onto the national stage, but what happened when it got there.

"It's a remarkable period of time," he said. "It's groundbreaking, not unlike Gonzaga (University) basketball, only in a more compact time period."

As he did with his other books, Delaney is self-publishing "Taking Flight." He has set up a website, http://www.ewufootballbook.com, where copies of the 350-plus page book can be pre-ordered.

Once several hundred orders are in, Delaney said he can proceed with printing. He hopes after printing costs are covered, much of the proceeds can be used to help the football program financially.