An intrinsic mosaic not forgotten 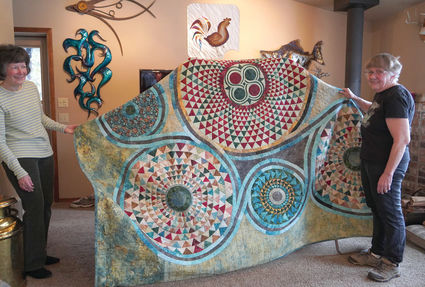 Ellen Miller (right) and Judy Scott (left) hold up the quilt Miller made that replicate a portion of the mosaic floor at Saint Mark's Basilica in Venice, Italy.

MALLOY PRAIRIE – Ellen Miller had really hoped her son had forgotten about the request.

The Medical Lake-area resident and member of the local quilting group "Stitch and Bitch" was asked to make a quilt of something her son Patrick Miller had seen while on a trip with a Medical Lake High School group in Venice, Italy. Patrick had brought back a postcard of the mosaic floor of the Basilica di San Marco - in English, Saint Mark's Basilica, often referred to as the cathedral church of Venice - but didn't have any photos of it because cameras were not allowed in the structure.

First started in the year 829 and re-opened in 1071 after a fire during a revolt burned it in 976, the cathedral is "distinctly Byzantine" in design, according to a citation in the Britannia online encyclopedia, with a Greek Cross floor plan surmounted by five domes. The interior is decorated with mosaics on gold ground throughout using a variety of marbles, with the floor being inlaid marble and glass.

"In the restricted light (of the cathedral), their colors glow," the citations notes of the mosaics.

The sight impressed the young Miller, who asked his mom if she could stitch a quilt just by using the postcard.

"It's a mosaic floor and no I can't," Miller said she told him. "I didn't have the skill."

Ellen kept working on her quilting skills, and about 10 years ago she began looking for a pattern of the floor she could follow. Her search came up empty, so she began to make one herself, drawing freehand on sheets of paper, which she eventually showed to her son.

"Up to that point, I had stopped talking about the quilt," Miller said. "I had hoped he had forgotten. He had not."

Miller started work on the quilt just after Christmas five years ago. The design was too big to make as one piece by fitting on a bed, so Miller said she quilted smaller pieces that she eventually pieced together, practicing on the center circle to see if her pattern was going together like what was on the postcard. Miller only had this postcard from her son, Patrick, of the Saint Mark's Basilica floor with which to freehand draw a pattern for the quilt.

Over the years, Miller said she worked on the quilt when she could, usually in the winter or on days when wet weather kept her indoors and away from one of her other main loves - her garden. But as the quilt began taking shape, and the 2019 holidays loomed closer, Miller said it became her main focus so she could get it completed and give it to Patrick on Christmas as a present.

"I finished two days before," she said. "They (Patrick's family) knew I was working on it. They picked out the colors and saw the pattern."

The surprise was the timing.

"They didn't think it could be done for Christmas," Miller said. "That was the surprise."

It was also something her fellow Stich and Bitch members took a lot of pride in that one of their group had been able to make such a design. Miller's son graciously let her bring it to the group's Feb. 6 get together at Mary Ann Coley's home off Malloy Prairie Road.

"I've been quilting since 1990 and I would never try anything like that," member Judy Scott said. "Most quilters would like a pattern."