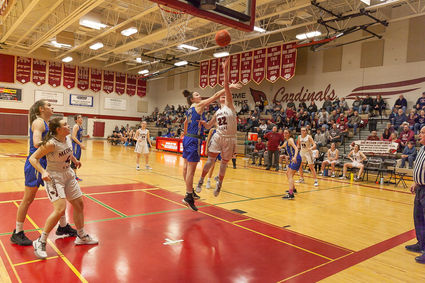 MEDICAL LAKE — The Lady Cards notched an exciting win on a last second clutch 3-pointer by Emily Munson to beat Deer Park (7-3, 13-5) before a home crowd Friday night 47-44 that extended their winning streak to four games.

It was a back-and-forth game that went right down to the buzzer. Medical Lake took the first quarter by two points, then allowed the Stags to take over the court in the second by an eight-point margin for a 21-15 Deer Park lead at the half.

Then the Cards stepped up their offense in the third to take a 33-32 lead heading into the fourth.

At the 5 minute, 48-second mark Medical Lake had stretched their lead to five-points before Deer Park launched a strong counter-offensive that tied the game at 40 at the 3:38 mark, then a 42-41 lead.

Then Allison Duncan nailed a 3-pointer at the one-minute mark to give the Cards the lead.

But the Stags came back to tie the game at 44 at the 14-second mark before Munson made her clutch shot to seal the Cardinal win.

“We struggled in the first quarter trying to find a rhythm,” head coach Kyle Lundberg said, noting the Stags run a 1-3-1 defense that the Lady Cards had practiced for. “I think they just had to see it and feel it. In the second half they figured it out.”

Jaycee Oliver led Cardinal scoring with 12, followed by Munson and Emma Maxwell who both scored 10 points each.

Normally high-scoring Lexie Redell was taken out of the game early on with a concussion after taking a charge and hitting her head in the subsequent fall.

“Losing Lexie was a big thing,” Lundberg said. “I think all the girls that played, they all stepped up.”

As of press time the Cardinals were scheduled to host No. 4 Newport (2-8, 7-11) on Tuesday, Feb. 4, before travelling to face Freeman tonight and Deer Park one more time on tomorrow night. Both games are a 7:15 p.m. tip-off.