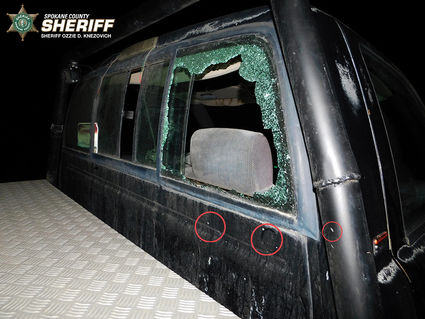 The rear passenger window of a vehicle allegedly shot out by assault suspect Robert Edens is pictured.

After an investigation, deputies arrested Robert W. Edens on two counts for first-degree assault on two males who arrived at the residence in the 20900 block of West Indiana Lane around 9 p.m. to repossess a vehicle. According to a SCSO news release, as the two men walked up the driveway to the residence, they were confronted by a man with a flashlight.

The men gave the name of the male they were looking for to the man, who told them no one by that name was at the residence. The men returned to their vehicle when they suddenly heard gunshots and the rear passenger's side window was shattered. The driver rapidly accelerated away from the residence, lost control and crashed into a wood post at the end of a nearby driveway.

The men continued to drive until several SCSO deputies contacted them at the intersection of North Christensen and Tracy Lane. While checking the men for injuries, the deputies were advised the suspected shooter driving a dark-colored diesel Dodge pickup was attempting to locate the two men.

Eventually a black Dodge diesel truck approached the location of the stop, and after taking positions of cover, the deputies returned to their vehicles, got behind the Dodge and made a high-risk traffic stop and detained two men in the vehicle, the driver of which was identified as Edens.

Edens told deputies he received a text of someone prowling his property, causing him to arm himself with a 12-gauge shotgun and walk to the end of the driveway where the two men had parked. When he got close, he fired 3-5 warning shots into the air and ground and the truck took off.

Edens insisted he had not fired at the other truck, but when asked how he knew the truck had been damaged, said rocks must have damaged it when he fired into the ground. A search of his residence turned up the shotgun along with five spent shotgun casings at the end of his driveway.

Edens was transported and booked into Spokane County Jail on the two assault charges.