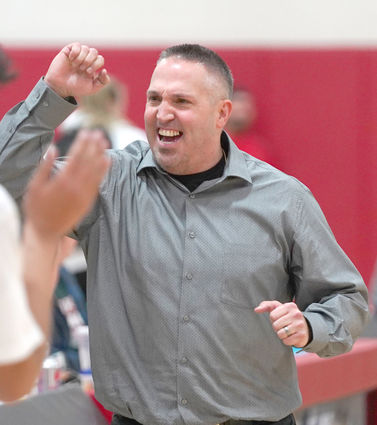 Blackhawks boys basketball head coach Frankie Keplinger has been placed on administrative leave over concerns about his coaching style.

CHENEY – Blackhawks boys basketball head coach Frankie Keplinger has been placed on administrative leave, according to a statement from school district officials, while an investigation into his coaching style is conducted. District officials also said in the statement that assistant coach Chad Smith has been placed on administrative leave as well.

An unnamed source first disclosed to the Cheney Free Press on Jan. 25 that Keplinger had been sidelined, but stated the reason was for incorrect information on his resume. School district officials denied this allegation on Jan. 27.

According to a June 4, 2019 news release announcing his hiring, the district stated Keplinger played his high school basketball at Basic High School (Academy) in Henderson, Nev. and accepted a scholarship to "continue his basketball career at Sacramento State University." The release also stated Keplinger began his coaching career as a freshman coach at Basic, followed by three seasons as assistant coach and seven seasons, beginning in 2000-2001, as head basketball coach.

In 2007, the release stated Keplinger "helped open Coronado High School in Henderson as the head basketball coach and remained there through 2011."

Sacramento State Assistant Athletic Director for Media Relations Brian Berger said in a Jan. 30 email that the Hornets have no player named Frankie Keplinger referenced on their all-time players list, and only three players named "Frank," all of whom played in the 1950s. A review of the list emailed to the Cheney Free Press confirmed this.

"That was before my arrival so I can't be 100 percent sure, but our men's basketball records are pretty thorough," Berger said of the all-time list's compilation.

According to online information, Coronado High School was founded in 2001 and has only had two boys' basketball head coaches in its existence: Paul Berg and Jeff Kaufman. According to a sports note in the Sept. 29, 2010 Las Vegas Review-Journal, Berg resigned after nine seasons to become dean of students at an area middle school. Kaufman was hired soon after and is the Cougars current head coach.

"We have only had two coaches (boys basketball) in school history," Coronado Athletics Director Tyrel Cooper said in an email. "I asked around and a few people remember him (Keplinger) as a B/JV (boys/junior varsity) coach in the program, but not as the varsity head coach."

Officials at Basic Academy did not respond to requests for information or comments.

Messages left on Keplinger's cellphone were not returned.

John McCallum can be reached at jmac@cheneyfreepres.com.