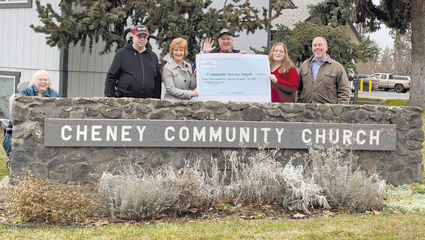 CHENEY – It’s was a busy year for the charitable organization, the West Plains Angels, in 2019, and while president Tony Blount is planning on even more fund raising events in 2020, he’s also thinking of cutting down on the frequency these occur near the end.

The 501(c) (3) organization started by Blount and his wife Amy in March 2018 held two fund raisers within a week of each other in December – the annual Christmas banquet with silent and live auctions and the Christmas Tree Jackpot drawing. Both required a lot of legwork to coordinate and get up and running.

“It was just a little too much,” Blount said with a laugh.

Those events raised donations totaling $6,500, money that goes in its entirety to several organizations on the West Plains. Blount estimates the West Plains Angels raised at between $30,000 – $35,000 this year for charities and non-profit groups in Cheney, Medical Lake and Airway Heights through fund raisers ranging from a car wash to break a world record for the most vehicles washed in eight hours, to drawing a ticket for a Christmas tree of prizes.

The banquet raised $4,500 that was distributed evenly to three organizations: Feed Cheney, Feed Medical Lake and EWU’s Food Pantry. That money will provide some needed resources for all three groups.

Feed Medical Lake director Joanna Williams said they planned to use the $1,500 given them to provide something lacking with their monthly food distributions: protein. Right now, Williams said cottage cheese and yogurt is the extent of the protein they are able to hand out, but with the banquet funds, they hope to turn that into something more substantial.

“We’re hoping to buy 100, one-pound packages of hamburger,” she said. “That way we can give everybody a chunk of meat to take home.”

Williams said those plans haven’t been finalized yet, and the organization’s board will meet later this month to discuss the idea. They are also looking at using some of the proceeds to fund the cooking and food safety classes Williams and others — who are certified food instructors — periodically put on.

Kriegh said their portion of the funds raised will go towards monthly operations at Feed Cheney, which at about $500 per month will help carry the organization well into spring.

“That primarily covers groceries purchased from Second Harvest Food Bank to distribute to our guests,” Kriegh said. “It covers ingredients for dessert, paper products and other supplies.”

Blount, a disabled veteran wounded three times in Vietnam, moved to Cheney in April 2013 after living for 10 years in Ritzville and prior to that, 26 years in North Bend. He began charitable work locally with the veterans’ organization, Time for Remembrance, before founding West Plains Angels with his wife Amy, and said they have a number of events planned for 2020, one of the biggest being a fashion show in April.

“Purpose, meaning, connection,” Blount said is why he volunteers his time coordinating fund raising events. “Just the idea of being a service to others.”

Blount said the mission of West Plains Angels is to “financially benefit veterans’ organizations churches, schools and other non-profits and groups that enrich the quality of our community by helping and being of service to others.”