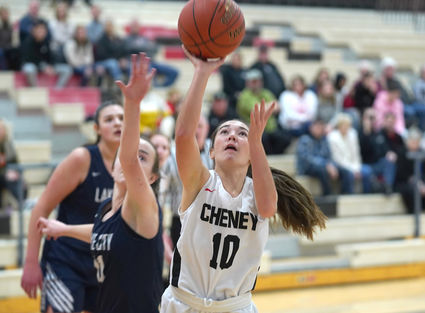 CHENEY – Points were few and far between last Friday for the Lady Blackhawks, who couldn’t buy a basket in their 41-26 non-league home loss to Idaho 5A Lake City.

Cheney’s first points didn’t come until the 4:52 mark in the first quarter, but then again, Tylin Hertel’s jumper merely tied the score at 2. But while the Lady Blackhawks remained cold offensively, the Timberwolves began to finally heat up, led by 6-foot-4-inch junior post Brooklyn Rewers, who scored many of her game-high 22 points off offensive rebounds.

Lake City (8-2) built a 28-14 halftime lead, which Cheney chipped away at to pull within nine at 30-21 on another Hertel jumper but could get no closer. The Timberwolves broke the game open with an 11-0 run to go up 41-21 with 4:25 to play before the Lady Blackhawks bench put on a final spurt in the game’s last minutes.

Head coach Roxie Smith said Lake City’s perimeter defense was more intense than they had expected, challenging the ball aggressively and staying close to shooting guards Evans and top-scorer Maggie Smith, who was held to just four points. But Cheney’s defense was just as stout, with the exception of being able to counter the presence under the hoop of Rewers.

To counter, Smith said they spent the next few days in practice working on speeding up the pace of Cheney’s game, getting quickly into their transition offense and not letting opponents dictate the pace of play. The Lady Blackhawks (1-5, 0-1 Great Northern League) won’t have to wait too long to put that work into practice as they return to GNL play by hosting West Valley this Friday.

Smith said the Eagles, ranked eighth in the state in 2A at 7-1, 1-0 GNL, are faster than ninth-ranked Clarkston, who Cheney lost to 48-42 on Dec. 13, and will apply defensive pressure “baseline to baseline.” Cheney will try to slow down their leading scorer Hailey Marlow as much as possible, but will focus more on containing her teammates.

Cheney follows Friday’s game with a non-league trip to face Greater Spokane League 3A North Central (4-5) on Saturday and then stays on the road to face 14th-ranked East Valley (7-2, 1-1) East Valley on Tuesday, Jan. 7. Smith said the Knights will be a better match up as they feature a post-oriented game similar to Cheney’s.

Smith said the team is working hard in practice and keeping their heads up, despite a disappointing record at this point in the season. Smith said she and her coaches keep reiterating the old adage that it’s not how you start, but how you finish.

“We need to be good in February, that’s what I keep telling them,” she said.