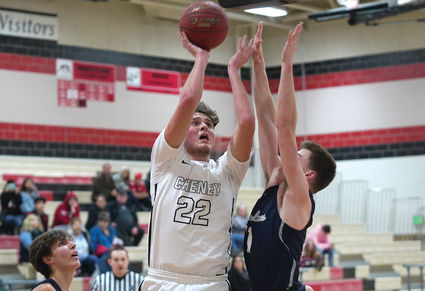 CHENEY – Kaiden Custer poured in 29 points and his teammates hit key free throws in the game’s final minutes to hold off Idaho 5A Lake City, 63-57, last Friday for Cheney’s first win of the 2019 – 2020 season and new head coach Frankie Keplinger’s first victory as a Blackhawk.

Keplinger said his players executed the game plan he and his assistant coaches drew up with near perfection. Instead of playing more outside at the 3 or small forward position, Keplinger said they moved Custer under the basket to the 4 or power forward slot where he can use his strength and quickness on the low blocks, which led to a more aggressive and controlling game for the senior.

“He is our most talented guy underneath the basket,” Keplinger said.

Keplinger also singled out the play of forward Trinidad Richardson. The junior drew the assignment of defending Lake City’s best 3-point shooter, Jack Kiesbuy, and held the junior to a 0-3 night from beyond the arc.

“He (Richardson) will do anything we ask him to do,” Keplinger said. “I couldn’t be more proud of him. He was fantastic.”

The Timberwolves (4-2) have been beating teams with their 3-point shooting, something Keplinger said they limited on Friday. Cheney got off quickly, opening an 11-2 lead late in the first quarter before Lake City began to heat up from the field.

The Timberwolves took their only lead, 24-23, with 50 seconds to play in the half, but a Goodloe jumper put Cheney back on top. Cheney never managed more than a six-point margin from there on, with Lake City’s Ben Janke tying the score at 47 with a pair of free throws with 5:46 remaining in the game.

Whiteley converted a three-point play to put Cheney up 50-47, but after another pair of Janke free throws pulled them within one, Henry Browne buried a deep 3-pointer from straight on to put Cheney back up by four and they held on from there.

Keplinger said the Knights are improved, well coached and aggressive. West Valley is much like Cheney with its offensive struggles, but relies more on outside shooting than the Blackhawks, who are bigger inside.

“We’re going to take away their 3s and be super physical with them,” Keplinger said. “We’ll be all right.”

Despite being 1-6, Keplinger still feels his team is poised for a big run in league play and should be successful from here on out.

“We can will all these games,” he said. “We just need to focus.”