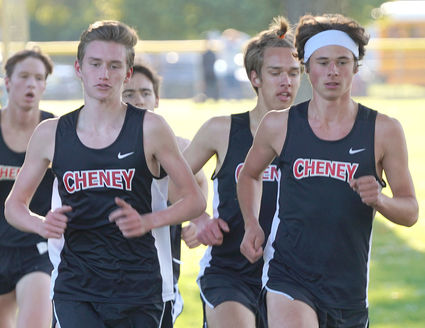 CHENEY — Cheney’s boys cross country team was on a mission to right what they felt was a wrong done them in 2018 when they were edged out of advancing as a team in the post-season at district competition by West Valley.

The Blackhawks put in the off-season miles – and it paid off with a District 7 championship and a second-place finish at regional competition between the Central Washington Athletic Conference and the Great Northern League. Both achievements were the best boys team accomplishments since the 2015 season.

At state, the Blackhawks hoped for a trip to the trophy podium, but came up three places short, finishing seventh overall. Senior Bas Holland placed fourth, his highest finish ever in four years at state in Pasco while fellow senior JT Gaspar – dropping almost three minutes from his best time in 2018 – finished 23rd and junior Beckett Schoenleber 26th.

Holland and Gaspar were second and third at districts, with Schoenleber seventh, and went third and fifth at regionals with Schoenleber 10th. The Blackhawks went 3-1 in GNL regular-season meets.

Cheney loses Holland, Gaspar and fellow varsity runners Kyle Peabody and Andres Margraf, but should return state scoring runners Dylan Thornburg and Steven Johnson as the school jumps to the 3A level in the Greater Spokane League.

“The four seniors will be missed dearly, but have left the team better than ever,” head coach Derek Slaughter said after state.