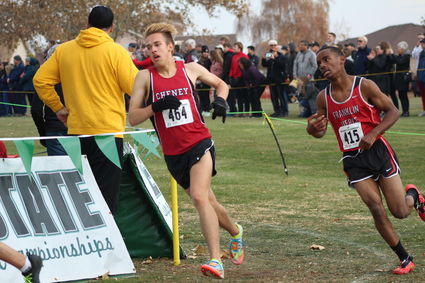 CHENEY – Cheney High School’s Derek Slaughter gets to keep his current hair color — at least until the next season’s wager.

The Blackhawks cross country head coach had pledged he would dye his hair bleach blonde should the boys’ team mount the trophy stand at the 2A state meet last Saturday. Cheney gave it a valiant effort, but came up short, finishing seventh out of 16 teams competing at Sun Willows Golf Course.

Cheney placed three of its five scoring runners in the top-30 finishers, but had too big of a time gap between No. 3 Beckett Schoenleber and No. 4 and 5 runners Dylan Thornburg and Steven Johnson, who Slaughter said “stepped up for sure” in competition. All three are underclassmen.

“This means that 3-5 are now all coming back next year for our run at 3A,” Slaughter said.

Bas Holland led the Cheney boys, placing fourth overall with at time of 15 minutes, 41.80 seconds. It was the senior’s highest finish, having placed sixth last year, 10th in 2017 and 30th in 2016. Holland also holds the Blackhawks record for 3-miles and 5,000 kilometers.

Senior JT Gasper – showing what Slaughter said had to be the biggest improvement in the state – was 23rd with a time of 16:20.50. Gasper best time last year was 19:02.

“The four seniors will be missed dearly, but have left the team better than ever and we really hope to springboard off this success to move into the ‘big boy’ ranks next year with some of the best teams in the state in our league and region,” Slaughter said in an email.

Cheney will move from 2A to 3A next fall and compete in the Greater Spokane League. 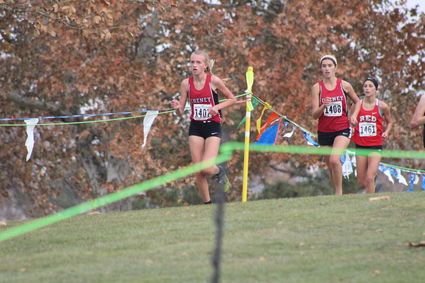 The Blackhawks girls also showed they may be lining up to do well in the GSL, with all two of the three runners at state finishing in the top-50 and the third just barely missing that cut. Freshman Samantha Habegger finished 29th with a time of 19:56.00, while junior Marion Mager-Reeser was 31st in 20:05.70 and freshman Tenaya Belsby was 52nd in 20:34.10.

“Marion used her wisdom on the course (third appearance at state) to what I think was her best race of the season,” Slaughter said. “Tenaya and Sam ran with a lot of excitement for freshmen out on the course for the first time.”