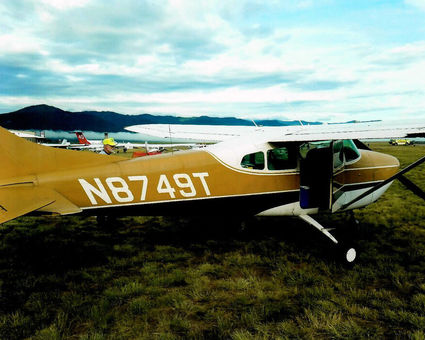 Rescuers are searching for this missing Cessna 182 Skylane in remote areas of Pend Oreille County near Ione and Sullivan Lake.

COLVILLE – The search for a missing pilot and plane has moved to the forests between Colville and Ione.

Spokane County Search and Rescue officials this morning identified the missing pilot as Terry Coleman, 67, of Colville. He went for a one-hour flight Monday in his Cessna 182 Skylane and failed to return.

Because of weather, rescuers are conducting a ground search only today, as they did yesterday.

Coleman did not file a flight plan, but is believed to have flown from Colville toward the town of Ione and Sullivan Lake, having departed at about noon.

So far, rescue teams have not picked up a signal from the plane's emergency locator beacon, officials said.

Anyone who sees the plane is asked to call 360-410-0461 or email missingaircraft@wsdot.wa.gov.

The state Department of Transportation is leading the search and rescue effort.