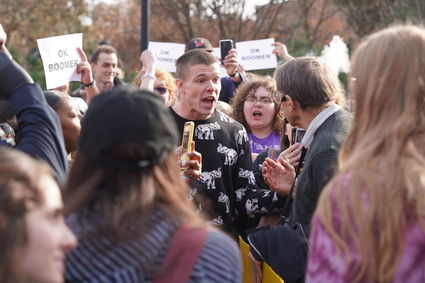 According to several students, the three - and others affiliated with them - have been coming to campus regularly for the past several years, usually once a quarter but sometimes more often. The speakers - holding Bibles and using portable speaker systems - admonish students regarding lifestyle and sometimes lack of beliefs.

Thursday, EWU students appeared ready for them. According to one woman who didn't give her name, the three arrived at the campus mall around 11 a.m., and not long after student counter protesters began appearing to challenge them.

By roughly 1 p.m., a crowd of several hundred students had surrounded and separated the three, two of whom stood their ground in the center of the mall while a third wandered the perimeter, moving from in front of Tawanka Commons to the steps of the JFK Library and back to the middle of the mall. A heavy police presence stayed on the mall perimeter, with several officers standing near the protesters at times.

One of the speakers was arrested for alleged assault after he spit on a woman and slapped her on the buttocks while an EWU student was also arrested for ignoring police officers' commands. The crowd often broke into chants of "I don't feel safe," and "Go Home."

Many in the crowd carried placards that said "Ok Boomer." According to the website, Know Your Meme, the phrase used by Millennials "is a dismissive retort often used to disregard or mock Baby Boomers and those who are perceived as old-fashioned and being out-of-touch."

EWU student Ashley Kuria said the three men appeared on the mall yelling at students, calling women whores, telling women what they should do with their bodies and that vacuums should be for cleaning, not sucking fetuses out of women's wombs.

"It feels like I'm not safe here," Kuria said with emotion that left her breathless. She said she was angry that law enforcement was protecting the anti-abortion/LGBTQ speakers rather than the students. 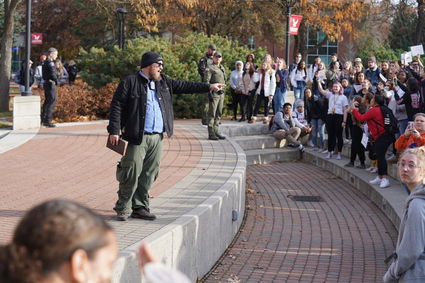 An anti-abortion/anti-LGBTQ speaker addresses EWU students who were protesting his and two other speakers presence on campus Thursday afternoon.

EWU senior Danny Allen said there is usually reactions to the appearance of the anti-abortion/LGBTQ speakers, but nothing as strong as Thursday. Allen, who said he was a Christian from a non-denominational church, said he didn't agree with what the men were saying, but felt they had the right to say it.

"People don't like being confronted by what they don't want to hear," Allen said of the counter protesters.

"It's a public campus," Meany said. "Both sides have the right of free speech. We encourage our students to respect them."