Varsity seven, four girls move on to regionals near Yakima 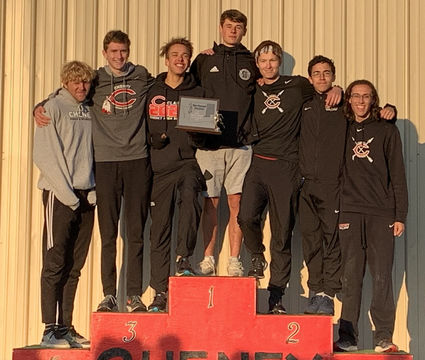 CHENEY – Led by three top-10 finishes, the Blackhawks boys cross country team captured the District 7 title in competition at Mead High School last Saturday afternoon. It was the first district title since 2015, and the first time the boys are advancing all seven varsity runners to regionals since 2016.

Cheney finished with 43 points, seven points ahead of runner-up and Great Northern League regular-season champion Pullman and 22 points ahead of West Valley. Pullman’s Eliason Kabasenche captured the district title with a time of 16 minutes, 13.67 seconds, but he had a little bit of heat from Cheney seniors Bas Holland and JT Gasper.

Holland was just behind Kabasenche in second in 16:15.10, with Gasper third in 16:35.27. With Pullman’s Asher Cousins finishing fifth, the Blackhawks’ third scoring runner, Beckett Schoenleber crossed the tape in seventh with a time of 17:31.38.

Cheney’s girls ran well but finished out of the running for state, coming in third with 54 points. Pullman was second with 37 points while defending 2A champion West Valley emerged as district champion with 29 points.

Junior Jaela Thornburg was 16th in 22:04.68 and Megan Habegger was 19th in 22:48.26. Samantha Habegger, Mager-Reeser, Belsby and Bowes all advance as individuals to this Saturday’s regional competition at Apple Ridge Golf Course near Yakima against teams from the Central Washington Athletic Conference.

Both of Cheney’s junior varsity squads emerged as district champions at Mead, with the boys holding off Pullman 22-38 and the girls West Valley 29-46. Steven Johnson won the boys race, with Finnegan Syrie third and Noah Hinton fifth, while senior Riley Potter and junior Mayah Spakousky went 1-2 for the girls.

Head coach Derek Slaughter was proud of the way his athletes ran, particularly the JV teams who both finished 4-0 league season with district titles. Four teams and 28 individuals move on from regionals to state in Pasco on Nov. 9, and Slaughter felt the Blackhawks will occupy a number of those slots.

“It looks good on both sides to get them through to state,” he added.