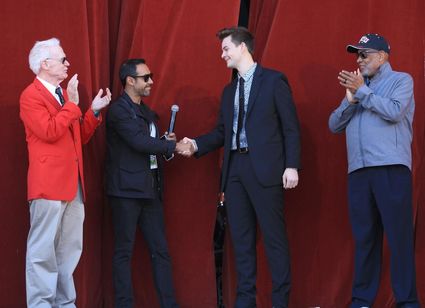 MONTEREY, CALIF. — Former Medical Lake standout musician Nick Isherwood was recently named the 23rd recipient of the Jimmy Lyons Scholarship, a four-year, full ride scholarship to the Berklee College of Music in Boston, Mass., at the 2019 Monterey Jazz Festival, where he performed with faculty saxophonist George Garzone and the Berklee group the Berklee Global Jazz Ambassadors, according to a Berklee press release.

Isherwood is the first bassist to be selected in the scholarship’s history.

“I feel incredibly grateful and honored to have been chosen for the Jimmy Lyons Scholarship,” Isherwood was quoted in the press release. “The Global Jazz Ambassadors and George Garzone taught me so much about playing this music and exploring new sounds. It was especially beautiful, and kind of surreal, to play George’s music alongside him.”

“I’m am very, very proud of him,” Sullivan said. “He has worked so hard for so many years.”

Isherwood’s introduction to music was through classical guitar, which he studied at Medical Lake middle and high school, gaining statewide recognition and awards, according to the press release. He later shifted his focus to the bass guitar, and then eventually to the upright bass. Some of his most influential early musical experiences occurred at Eastern Washington University’s summer jazz camp, where he was able to study with renowned jazz musicians and educators including Jenny Kellogg, Vern Sielert, Dru Heller, and Michael Waldrop. In 2016, he was selected as the top bassist out of six competing states to perform with the National Association for Music Education All-Northwest Jazz Band.

After graduating high school in 2017, Isherwood received both academic and music scholarships to attend the University of Northern Colorado as a jazz studies major, according to Sullivan.

While she said the program at UNC was a ““wonderful jazz program,” as Isherwood grew musically he realized he needed something bigger, and Berklee was a long-held dream. He eventually decided to transfer, even though he could have graduated a year early from UNC if he stayed due to the advance placement courses he had taken at Medical Lake.

Then he was awarded the scholarship.

“When he got the scholarship he was pretty blown away,” Sullivan said.

Isherwood has studied with nationally acclaimed bassists Erik Applegate and Nicholas Recuber, and performed with multiple jazz combos and big bands, including the UNC Lab Band II under the direction of drummer Jim White. He has played on multiple DownBeat Student Music Award–winning recordings, and was chosen as the bassist for the modern jazz septet Boundless, whose new album will be released by Fresh Sound Records in late 2019.

“He never wanted to be famous, he just has this need to make music,” Sullivan said, telling her son, “the world needs music.”

Isherwood was not immediately available for comment before press time.