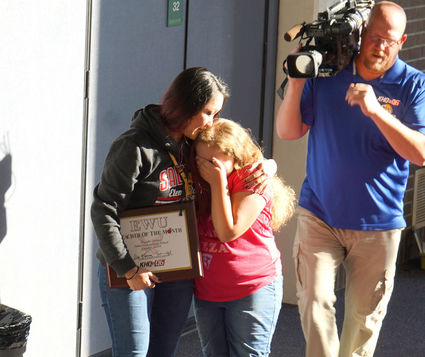 CHENEY – One can hardly fault Salnave Elementary School teacher Kyndle Palmer for not quickly reacting with excitement at the news she heard on Oct. 18. In fact, when she heard her named called by KHQ Wake Up Show anchors Leslie Lowe and Kalae Chock as Eastern Washington University’s Teacher of the Month at a surprise ceremony last Friday, Palmer’s only reaction was to smile, look around at the screaming Salnave students – and bow her head.

But as she rose to accept the award, the tears began to flow — as they eventually did for the fifth-grade student who nominated her, Emma Plewnarz.

Palmer has been teaching for about 10 years, and did her student teaching at Salnave while earning her degree from Eastern Washington. She student taught in the second and third-grade/multi-age level and now teaches fourth and fifth-grade.

Palmer said it’s the kids that send her home with a smile every day, and loves the interaction that takes place in her classroom.

“A smile and happy tears almost every day because I love working with them,” she added.

“She’s so kind and she helps everyone else and she talks with people one on one,” Plewnarz said. “I sometimes stay in at last recess and talk with her and she’s just amazing.”

The Teacher of the Month program is a collaboration between Eastern Washington’s education department, KHQ Local News and Spokane Teacher’s Credit Union to recognize local teachers for their excellence. Several Cheney School District teachers have been honored in the past by the program.

“The District is fortunate that Ms. Palmer has chosen to share her expertise with the children of Cheney Public Schools,” district officials said in a news release.