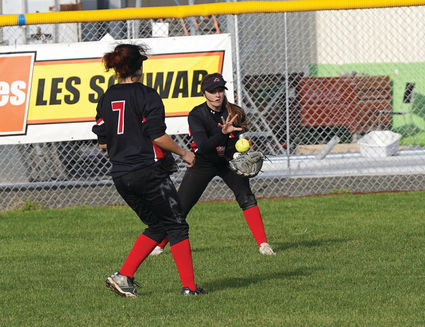 CHENEY – And just like that, the Cheney High school slow pitch softball team has its first ever win in its inaugural season.

And not just its first win. The Lady Blackhawks’ 18-7 thumping of Gonzaga Prep on Sept. 24 precipitated the team’s first winning streak — which as of press time Tuesday, Oct. 1, stood at three.

Cheney followed the win at Gonzaga Prep with an 8-7 win over visiting North Central on Sept. 26 and kept the ball rolling with a rally for a 14-5 win over fellow Greater Spokane League 2A opponent East Valley on Sept. 30. The Lady Blackhawks banged out 38 hits in the three games.

“Definitely we’re getting better,” head coach Gary Blake said. “We’re not popping up as much, but we’re still inconsistent.”

The Lady Blackhawks pounded out 12 hits against Gonzaga Prep, capitalizing on eight Bullpup errors while committing only one of their own in the field. Tatum Sloan, Isabella King, Miranda Barber and Cierra Morton each went 2 for 5 at the plate, with Sloan driving in five runs.

Makenna Olson got the win in the pitching circle, coming on in relief in the second inning for Morton who struggled with her control in the first.

The Lady Blackhawks broke a 3-3 tie with five runs in the bottom of the fourth against North Central and played hang on from there as the Indians scored three in the sixth and one more in the seventh to make things interesting. Lindsay Hagreen went 3 for 3 — including a triple — and a walk and scored twice to lead Cheney offensively. Morton got the win in the circle, with Olson coming on in the seventh for the save.

After staking visiting East Valley to four runs in the top of the first, the Lady Blackhawks proceeded to score in the next four innings to take a lead they never relinquished. After the Knights pulled within one at 6-5 with a run in the fourth, Cheney put on the gas with four runs in the bottom of the inning and four more in the bottom of the sixth for their third win.

Sloan and King went 3 for 3 at the plate with Makyla Ward 3 for 4 in Cheney’s 16-hit attack. Sloan had two RBIs.

The Lady Blackhawks defense stranded 13 Knights runners — helped by two double plays where they managed to double up East Valley runners at third. Morton got her second win of the season, overcoming five errors behind her in the field.

“And yet, we won decisively,” Blake said.

With the wins Cheney moves up out of the GSL cellar and into a tie for seventh with Ferris, the Lady Blackhawks opponent on Tuesday, Oct. 1. At 3-4 in league, 3-6 overall, Cheney is also now the No. 3 seed in a potential 2A/3A playoff bracket of all six 2A/3A GSL teams along with 2A/3A independents Hermiston, Ore. and Grandview.

Cheney continues a busy schedule with five games over the next six days. After Tuesday’s game at Ferris, the Lady Blackhawks play host to Shadle Park (2-5, 2-5) on Thursday, Oct. 3, travel to Grandview for a doubleheader on Saturday and then GSL co-leader 3A Mount Spokane (6-0, 8-0) Monday before returning home to face 4A Lewis and Clark (4-3, 5-4) Tuesday.