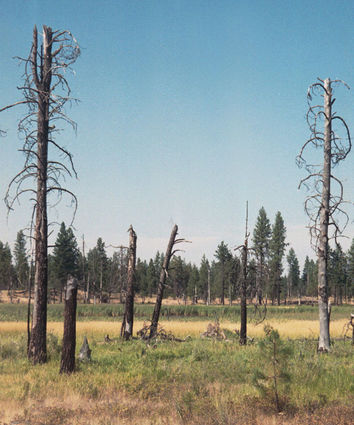 The U.S. Fish and Wildlife Service announced in a Sept. 18 news release that it will be conducting prescribed burns at Turnbull National Wildlife Refuge near Cheney again this fall. Burning will occur from October through February depending on weather conditions.

Refuge fuels specialist Ken Meinhart said one unit scheduled for burning is about 60 acres in the southern portion south of Cheever Lake. The other unit, about 300 acres, is in the north part of the Refuge but southwest of where the Columbia Plateau Trail passes underneath Cheney-Plaza Road.

“Weather will influence how many acres will be burned,” Meinhart said in an email. “The larger unit will likely be divided into smaller sections when/if crews begin working in the area.”

According to the news release, prescribed burning is done to accomplish refuge management objectives for improving wildlife habitat, reducing hazardous accumulations of vegetation and forest debris and decreasing the number of unhealthy and overstocked stands of ponderosa pine seedlings and saplings. Prescribed burning activities should have little to no impact on access to the majority of Refuge public use areas.

Fire operations will take place in accordance with the state’s Smoke Management Plan. Burning will only occur when weather and smoke dispersion conditions are favorable. Unlike spring burns that take into account a large amount of moisture content in vegetation, fall burns are contingent on weather conditions favorable to reducing the possibility of fire leaping from controlled environments to nearby vegetation that is very dry due to hot summer temperatures.

Spring burns also have to take into consideration wildlife nesting seasons, which can take place at this time.

If weather conditions prove favorable, fuels specialists will examine and survey targeted areas to determine the location’s ability to “carry” fire. On the day of the burn, a test portion of the area varying from 10 feet to 10 acres will be burned and then examined to see if objectives of the burn can be met. If so, the burn will continue.

The mission of the U.S. Fish and Wildlife Service is working with others to conserve, protect and enhance fish, wildlife, plants and their habitats for the continuing benefit of the American people. For more information on our work and the people who make it happen, visit http://www.fws.gov.