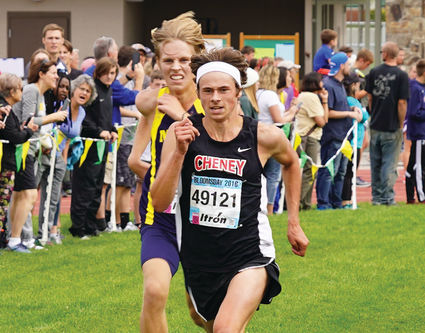 Cheney High School’s cross country teams have a lot of positives to point to coming out of their first meet — last Saturday’s multi-team Highlander Invitational at Shadle Park in Spokane.

“Great effort by the whole team,” head coach Derek Slaughter said in an email. “We can really tell that the team put in over 6,000 miles of running this summer.”

The Blackhawks senior boys finished fourth out of 26 schools with 99 points and trailed only Greater Spokane League teams Mt. Spokane, Rogers and meet champion Mead. Bas Holland became the fastest Cheney runner ever at the meet, turning in a fourth-place time of 12 minutes, 46.50 seconds on the 2.5-mile course.

The Blackhawks junior boys finished 16th out of 24 teams, with Beckett Schoenleber turning in a 13th-place time of 13:43.47, giving him the third fastest time of the day for Cheney. The sophomore boys were 10th, with Finnegan Syrie’s 27th-place mark of 14:34.96 leading the way while Adam Estock led Cheney’s freshman with a ninth-place time of 14:39.90, leading to the Blackhawks’ 13th-place team finish.

“Some notable runs were from JT Gasper and Finn Syrie who both took off over two minutes from their time from last year,” Slaughter said. “Trae Babcock was instrumental in the 3rd place finish by passing 10-20 athletes in the last 300 (yards).”

Senior Megan Habegger was 89th in 17:56.09 with fellow senior Caelyn Foster 93rd in 18:00.18, giving Cheney just under a 29-second gap between its first and fifth scoring runners. Seniors Riley Potter and Alexia Batchelor were 113th and 119th.

The Blackhawks freshmen girls were also fourth overall, with Samantha Habegger turning in a fifth-place finish in her first high school race with a time of 17:13.40. Tenaya Belsby was 23rd in 18:46.90, with Mika Cornell 49th, Kate Sargent 52nd and Nia Guest 57th. 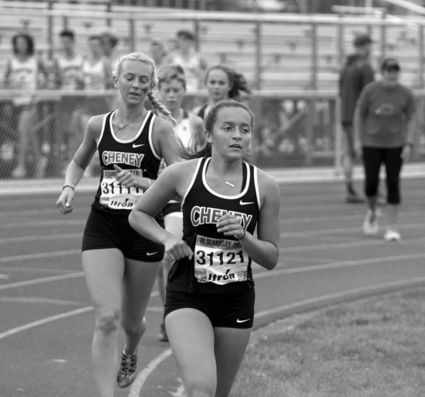 “I was really happy with the girls performance at Highlander,” girls head coach Camille Moseley said in an email. “We had a strong showing by Sam Habegger in the freshman race taking 5th with a solid time. We had an awesome pack in the varsity race lead by Marion Mager-Reeser with a spread of less than 30 seconds between our 1 and 5.”

Cheney opens Great Northern League action this week, hosting West Valley on Wednesday, Sept. 18, results next week. The Blackhawks follow that by hosting the third annual Nike-Battle of the 509 on Saturday, Sept. 21, at the Fairways Golf Course near Four Lakes. Racing begins at 3 p.m., with a “Best Dress Costume 5K Fun Race” for the public kicking off at 6:30 p.m..