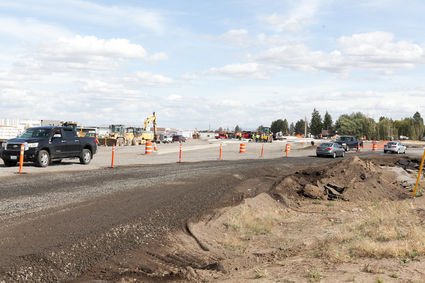 Contractors work on the north roundabout of the Medical Lake Interchange on Friday, Sept. 13. The roundabout will be opened for traffic between State Route 902 and Geiger Boulevard during a possible 10-day complete closure of the north half of the interchange beginning Sept. 3, according to the Washington State Department of Transportation.

Drivers may be enduring a 10-day closure of the north half of the Medical Lake interchange beginning Monday, Sept. 30, according to Washington State Department of Transportation officials.

"We're 95 percent sure we're going to try and do this," WSDOT Project Engineer Mark Allen said.

The closure will involve the north half of the interchange only, during which both the Interstate 90 westbound off- and on-ramps, and the freeway overcrossing structure between the north and south sides will all be closed.

Drivers using State Route 902 from Medical Lake will need to detour to the Four Lakes Int...