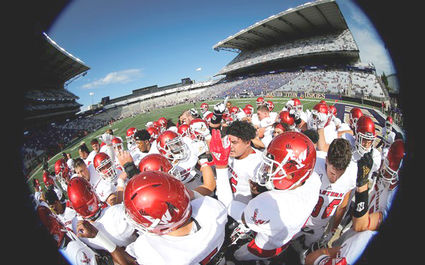 A pair of early fourth downs didn’t go Eastern Washington University’s way, while the Pac 12 University of Washington Huskies used a fast start to beat the Eagles 47-14 in the college football season opener for both teams on Saturday, Aug. 31, at Alaska Airlines Field at Husky Stadium in Seattle.

The Huskies turned a fourth-and-two into a 23-yard touchdown run on its first possession and went on to lead 21-0 in the first quarter. Eastern was out-gained 162-54 in the opening 15 minutes and had its own fourth-and-two play in the period end with a sack.

Junior Andrew Boston’s 64-yard touchdown catch and run from junior Eric Barriere was the lone score in the first half for the Eagles, who trailed 28-7 at halftime. The Huskies scored their next 14 points in the second half and finished the game with a 570-274 advantage in total offense.

Eastern entered the game ranked fourth in the STATS preseason top 25 poll for the NCAA Football Championship Subdivision and were ranked third in the American Football Coaches Association poll. The Huskies, meanwhile, were ranked 13th in the Associated Press media poll and 12th by the coaches in the NCAA Bowl Subdivision.

The 65,709 fans at Husky Stadium was the largest crowd Eastern has ever played in front of, breaking the record set in 2012 at Brigham Young of 64,522.

“We didn’t give them as much of a test as we anticipated,” Eastern head coach Aaron Best said. “I feel at times we were playing our brand and our niche of football, but we just weren’t consistent enough. The two bright spots were that we came away unscathed injury-wise and that there were no turnovers. First games you always worry about penalties, turnovers and sloppiness. We weren’t very tidy on both sides of the ball. That wasn’t the best version of Eastern football you’ll see this year in the next 11 games.”

With neither team committing a turnover, the game came down to yardage. The Huskies had 200 rushing and 370 passing, while EWU had 63 on the ground and 211 through the air for a total of 274. Washington, which had a significant advantage in yards per play (7.0 to 4.2), also registered four sacks while EWU’s defense had none.

Besides the TD connection from Barriere to Boston, the Eagles also had an impressive 15-play, 79-yard drive in the first half that ended with a missed 35-yard field goal attempt. Late in the third quarter Eastern put together a 14-play, 75-yard drive that was capped by a 4-yard TD run by Antoine Custer Jr.

Barriere completed 21-of-35 passes for 211 yards, and Boston had six catches for a career-high 112 yards. Junior linebacker Chris Ojoh had a career-high 11 tackles with a pass broken up. Junior rover Kedrick Johnson had nine tackles, and senior safety Dehonta Hayes added eight.

“There are always individual positives, but it’s a team game,” Best said. “Chris was flying around the field like he usually does, and Andrew was crisp with his route running and playmaking ability. We should have got the ball to him a few more times – we had a couple of errant balls where we could have moved the sticks and had some more chunk plays. But that’s the game of football.”

“A loss is a loss – there are no moral victories,” Best said of the opener. “Yes, that’s a heck of a football team. Yes, they’ve been Pac-12 champions multiple times. Yes, coach (Chris) Petersen has a great track record. But yes, we also didn’t have the best version of Eastern football today.”

Eastern returns a total of 20 players with 253 games of starting experience entering the 2019 season, including 10 players on defense with 72 starts and 10 on offense with 181 starts.

Eastern opens its five-game home schedule on Sept. 7 when Lindenwood visits “The Inferno.” Kickoff is set for 1:05 p.m. at Roos Field. The Lions were a member of the Mid-America Intercollegiate Athletics Association (MIAA) last year, and all 11 of their games were league counters. Lindenwood finished 4-7 for 10th in the 12-team league.